Case Report
Journal of Adenocarcinoma
Willis Maurice,
Watchful Waiting: Well Behaved Breast Robinson Angelica,
Cancers Non-Surgical Management of Hermann Stephan and
Breast Cancer Sadruddin Sarfaraz
Received: December 18, 2015; Accepted: December 28, 2015; Published: January 04,
Department of Internal Medicine, UTMB Hematology/Oncology, Dickinson, USA Corresponding author: Maurice Willis
In December 2007, a 71 year old female with no family history of breast cancer had a screening mammogram showing a new subcentimeter mass along the 3 o'clock axis of the left breast, posterior depth. Follow up ultrasound in February of 2008 showed  [email protected] an 8 mm solid mass at 3 o'clock, 9 cm from the nipple, which correlated with the mammographic mass. Ultrasound of the Department of Internal Medicine, UTMB axilla was unremarkable. Biopsy of the mass showed: moderately Hematology/Oncology, Dickinson, USA.
differentiated invasive ductal carcinoma, grade 2, ER+ (90%), PR+ (50%), her2neu- (1+), Ki-67 10% (low proliferative rate). The patient was referred to surgical oncology, radiation oncology, and medical oncology for consultation; however, she declined any surgical intervention or radiation therapy. Furthermore, the Citation: Maurice W, Angelica R, Stephan H,
patient stated that she was only willing to take oral therapy, so et al. Watchful Waiting: Well Behaved Breast aromatase inhibitors were thoroughly discussed with the patient Cancers Non-Surgical Management of Breast including the side effects of osteoporosis. The patient and her Cancer. J Adenocarcinoma. 2016, 1:1.
daughter voiced understanding and she started Arimidex therapy 1 mg daily in May of 2008.
On initial physical exam no dominant breast mass was palpated
and the axillary exam was unremarkable. The 2007 screening
mammogram showed (Figures 1-3) a new lobular mass in the
along the 3 o'clock axis of the left breast, posterior depth. No
additional imaging or intervention was performed and a period
of healing was advised given her recent history of multiple right
breast interventions.
Although the patient declined surgical intervention and radiation
therapy, she agreed to annual surveillance mammography to
evaluate for tumor progression. Follow up mammograms from
2010-2015 show no mammographic evidence of tumor growth
(circled) and the axilla appears stable (Figure 4).
Case 2
A 92 year old G4, P1, A0 female with prior history of left
2007. New lobular mass along the 3 o'clock axis of the intraductal papilloma and atypical ductal hyperplasia diagnosed left breast (LCC, LMLO) 9 cm from the nipple. in 2002, however excision was not performed due to patient's comorbidities including CHF, hypertension, atrial fibrillation and Copyright iMedPub This article is available from: http://adenocarcinoma.imedpub.com/archive.php
Journal of Adenocarcinoma
coronary artery disease. Other relevant past medical history includes cervical cancer status post hysterectomy (no other therapy per patient), stage I vulvar carcinoma status post local excision, and stage T3, N, and M0 colon adenocarcinoma s/p hemicolectomy.
In August of 2009, the patient presented to an outside facility with a chief complaint of a left breast mass. Mammogram was negative for malignancy, but survey ultrasound demonstrated a 2.1 x 1.1 x 2.1 cm mass at 10 o'clock, 9 cm from the nipple. Core biopsy of the 10 o'clock mass revealed IDC, intermediate grade, ER/PR positive, HER-2/neu negative.
Given the patient's co-morbidities, the patient was given the choice of (a). Surgical management (total mastectomy), (b). Oral therapy with Arimidex and close imaging follow up, (c) or no intervention. After extensive risk/benefit discussions, the 2007. Ultrasound (US) shows an 8 mm solid mass at 3 decision was made to proceed with oral daily Arimidex for 3 Figure 2 o'clock.
months with reassessment via ultrasound.
Initial mammogram and ultrasound from August 2009 was not available, however, the follow up ultrasound from the 3 month follow up in November 2009 reveals a 0.6 x 0. 5 x 0.5 cm mass at 10 o'clock, 9 cm from the nipple. This has significantly decreased in size from comparison survey ultrasound in August of 2009 (the reported size in August 2009 was 2.1 x 1.1 x 2.1 cm) (Figures 5
and 6).
November 2009 ultrasound images show biopsy proven IDC at 10
o'clock, 9 cm from the nipple; correlating with mammographic findings (Figures 7 and 8). The mass measures 0.6 x 0. 5 x 0.5 cm
and a post biopsy clip are noted within the mass.
Figure 9 (February 2010) US show that the mass has decreased in
size and measures 0.4 x 0.3 x 0.5 cm. Figure 10 (December 2010)
shows that the mass is no longer visible by US.
Patient continued annual US surveillance at our institution until Figure 3 2012. US show a stable 8 mm mass at 3 o'clock.
LCC's 2010 2011 2012 2013 2014 2015 LMLO's 2010 2011 2012 2013 2014 2015 Successive craniocaudal views (top row) and mediolateral views (bottom row) of the left breast show a stable appearing sub Figure 4 centimeter mass in the left breast at 3 o'clock, posterior depth.
This article is available from: http://adenocarcinoma.imedpub.com/archive.php 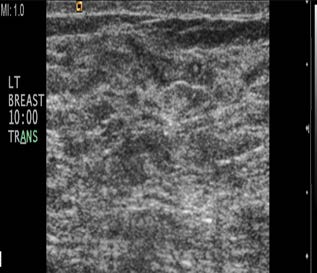 Journal of Adenocarcinoma
time. Only the clip (arrow) is identified is on the most recent 2015 left breast US, adjacent to the dystrophic calcification (star) (Figure 11).
Figure 5 Left MLO. Show the wing clip at the site of the
biopsy proven invasive ductal cancer (IDC). Mammogram and Ultrasound from November Figure 8 November 2009 Left Breast US.
Figure 6 Left CC. Show the wing clip at the site of the
biopsy proven invasive ductal cancer (IDC). Mammogram and Ultrasound from November Figure 9 February 2010 Left Breast US.
Figure 7 November 2009 Left Breast US.
September of 2015 at which time she completed 5 years of her Figure 10 December 2010 Left Breast US.
oral Arimidex therapy. No recurrence of cancer was noted at this Copyright iMedPub Journal of Adenocarcinoma
if the tumor is above one centimeter. We then follow up with 5 to 10 years of hormonal therapy. In post menopausal women greater efficacy has been shown with Aromatase inhibitors [1-8].
These patients have chosen a non standard approach and have lived a normal life for the last seven without many side effects. We use hormonal therapy alone in a great deal of metastatic breast cancer cases with great efficacy. These cases show us that we may be able to spare some elderly postmenopausal women with small tumors surgery, radiation and chemotherapy. The tumor profiles for these cases are perfect for this treatment with it having low KI-67 and high ER percentage. When we put their profile in Adjuvant on line her score was favorable for hormonal therapy [7].
Figure 11 September 2015 US show no cancer recurrence.
This not standard of care but may be a good choice for elderly The biopsy clip, arrow, is noted adjacent to the post-menopausal women with significant co morbidities or dystrophic calcification (star).
who choose not to have aggressive intervention. In these cases the patients choose not to have surgery, but have been a very compliant patient before the diagnosis of cancer and have been very compliant since. In our present medical model patient want Breast cancer therapy has evolved very quickly over the past to play a part in determining what therapies are best for them. In decade. We have approached the cancer with more less invasive some cases we have many choices [9]. Sometimes patients will treatments. The standard of for now is to remove breast cancer make choices when there is not much evidence to support their with breast conserving surgery when appropriate and then choice and we usually advise against such choices. In these cases radiate the capsule for small tumors. We consider chemotherapy the patients have made the right choices.
Copyright iMedPub Journal of Adenocarcinoma
6 Bonneterre J, Buzdar A, Nabholtz JM, Robertson JF, Thürlimann B, et al. (2001) Anastrozole is superior to tamoxifen as first-line therapy in 1 Napoli A (2013) MR-guided Ultrasound Offers Noninvasive Treatment hormone receptor positive advanced breast carcinoma. Cancer 92: for Breast Cancer. RSNA Press Release.
2 Graham LJ, Shupe MP, Schneble EJ, Flynt FL, Clemenshaw MN, et al. (2014) Current Approaches and Challenges in Monitoring Treatment 7 Ravdin PM, Siminoff LA, Davis GJ, Mercer MB, Hewlett J, et al. (2001) Responses in Breast Cancer. J Cancer 5: 58–68.
Computer Program to Assist in Making Decisions About Adjuvant Therapy for Women With Early Breast Cancer. J Clin Oncol 19: 980-991.
3 Zizi-Sermpetzoglou A (2009) Malignant adenomyoepithelioma of the breast--case report. Eur J Gynaecol Oncol 30: 234-236.
8 Goss PE, Ingle JN, Martino S, Robert NJ, Muss HB (2003) A 4 Ahlam A (2012) Malignant Adenomyoepithelioma of the Breast with Randomized Trial of Letrozole in Postmenopausal Women after Five Lymph Node Metastasis: A Detailed Immunohistochemical Study. Years of Tamoxifen Therapy for Early-Stage Breast Cancer. N Engl J Case Reports in Pathology.
Med 349: 1793-1802. 5 Howell A, Cuzick J, Baum M, Buzdar A, Dowsett M, et al. (2005) 9 Hibbard JH, Peters E (2003) Supporting Informed Consumer Health Results of the ATAC (Arimidex, Tamoxifen, Alone or in Combination) Care Decisions: Data Presentation Approaches that Facilitate the Use of trial after completion of 5 years' adjuvant treatment for breast cancer. Lancet 365: 60-62.
Information in Choice. Annual Review of Public Health 24: 413-433.
Copyright iMedPub