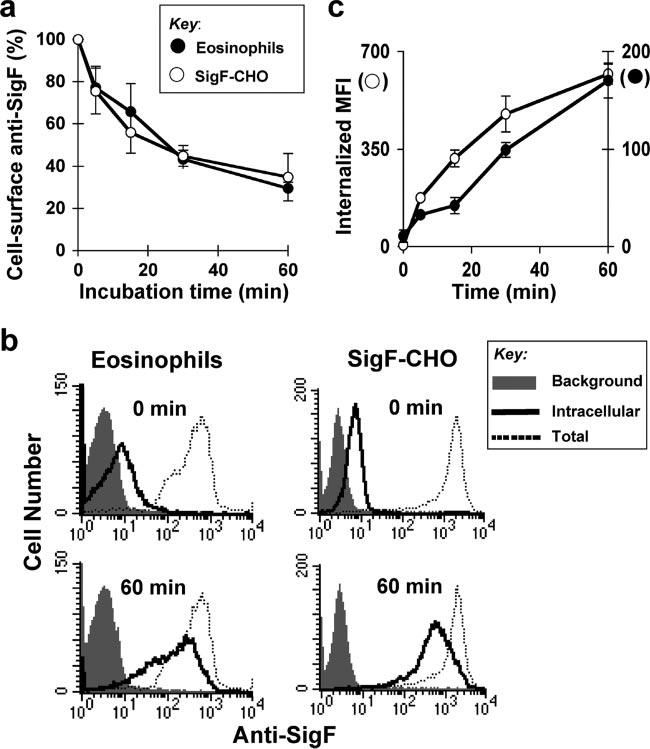 ENDOCYTIC MECHANISMS OF SIGLEC PROTEINS FIG. 1. Siglec-F mediates endocytosis following ligation by antibody. (a) SigF-CHO cells and mouse eosinophils were incubated with sheep anti-Siglec-F pAb on ice for 30 min and allowed to internalize at 37°C for the indicated time. Cell-surface anti-Siglec-F pAb was detected byFITC–anti-sheep IgG. Data are the average ⫾ standard deviation of three independent experiments. (b) SigF-CHO cells and mouse eosinophilswere incubated with PE–anti-Siglec-F (dotted line and solid line) or isotype control (shaded) for 30 min on ice. After washing, the cells wereallowed to internalize at 37°C for the indicated time. Following the incubation, cells were washed with 0.2 M glycine buffer pH 2.0 (solid line,intracellular) to remove surface-bound antibody or PBS/BSA (shaded area and dotted line, total probe) as a control. Bound or internalizedantibody was measured by flow cytometry. Representative results are shown. (c) Data are expressed as internalized mean fluorescence intensity(MFI) of PE–anti-Siglec-F measured as in panel b. Data are the average ⫾ standard deviation of triplicate determinants.
15 min and then washed extensively. Cells were observed by phase-contrast ternalized at a rate similar to that observed for eosinophils microscopy to ensure they were intact and to estimate the cell number.
(Fig. 1). Anti-CD22 monoclonal antibody (MAb) was similarlyinternalized from the cell surface of CD22-CHO cells, with 50% internalization observed within 30 min (data not shown).
The endocytosis of Siglec-F was also assessed by monitoring Endocytosis of Siglec-F following ligation by antibody.
the internalization of fluorescently labeled anti-Siglec-F MAb.
Endocytosis of Siglec-F was assessed by monitoring the de- Eosinophils or SigF-CHO cells were stained with PE–anti- crease of anti-Siglec-F from the surface of eosinophils using Siglec-F MAb at 4°C and warmed to 37°C for up to 60 min.
flow cytometry. Siglec-F was labeled with sheep anti-Si-glec-F on ice for 30 min. The temperature was raised to Cell-associated antibody was monitored by flow cytometry be- 37°C to initiate endocytosis, and at various times, cells were fore (total) or after removing residual cell surface antibody by transferred to 4°C. Residual cell-surface anti-Siglec-F was then a brief low-pH wash. After incubation at 37°C for 60 min, the detected by incubation with FITC–anti-sheep IgG. As shown in level of intracellular PE–anti-Siglec-F MAb increased gradu- Fig. 1a, anti-Siglec-F was internalized over time, reaching ⬃60% ally over time (Fig. 1b and c). The combined results demon- internalization relative to time zero after 30 min.
strate that antibody ligation initiates efficient endocytosis of CHO cells are often used to study the mechanism of endo- Siglec-F on both mouse eosinophils and SigF-CHO cells.
cytosis of immunoreceptors (14, 39, 68). Anti-Siglec-F bound Mutation of tyrosines 538 and 561 abrogates endocytosis of
to CHO cells stably expressing Siglec-F (SigF-CHO) was in- Siglec-F. Siglec-F carries two potential cytoplasmic tyrosine- 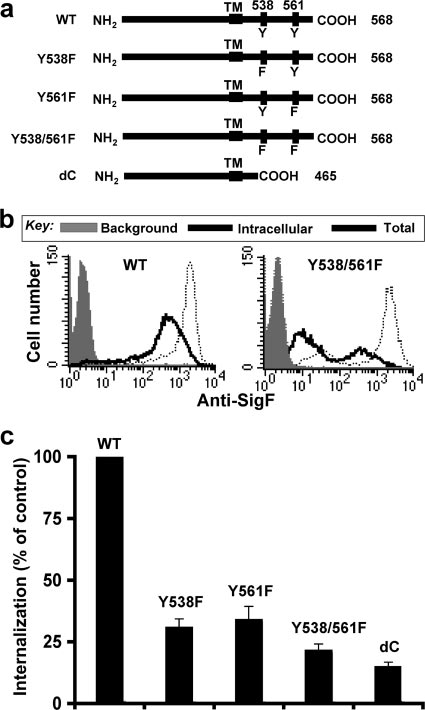 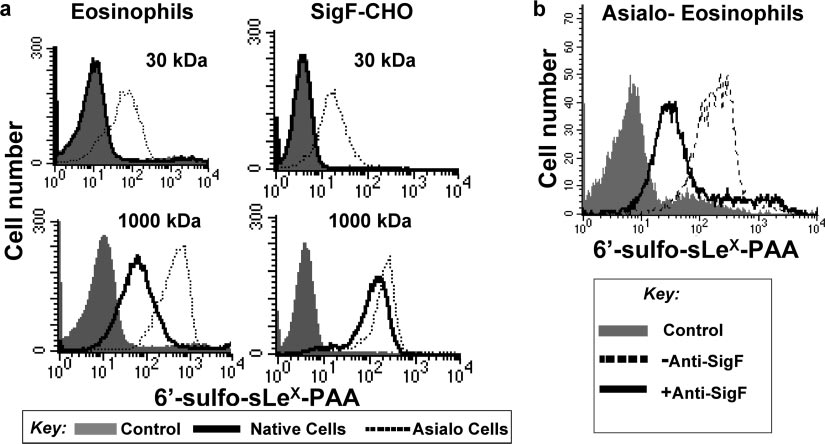 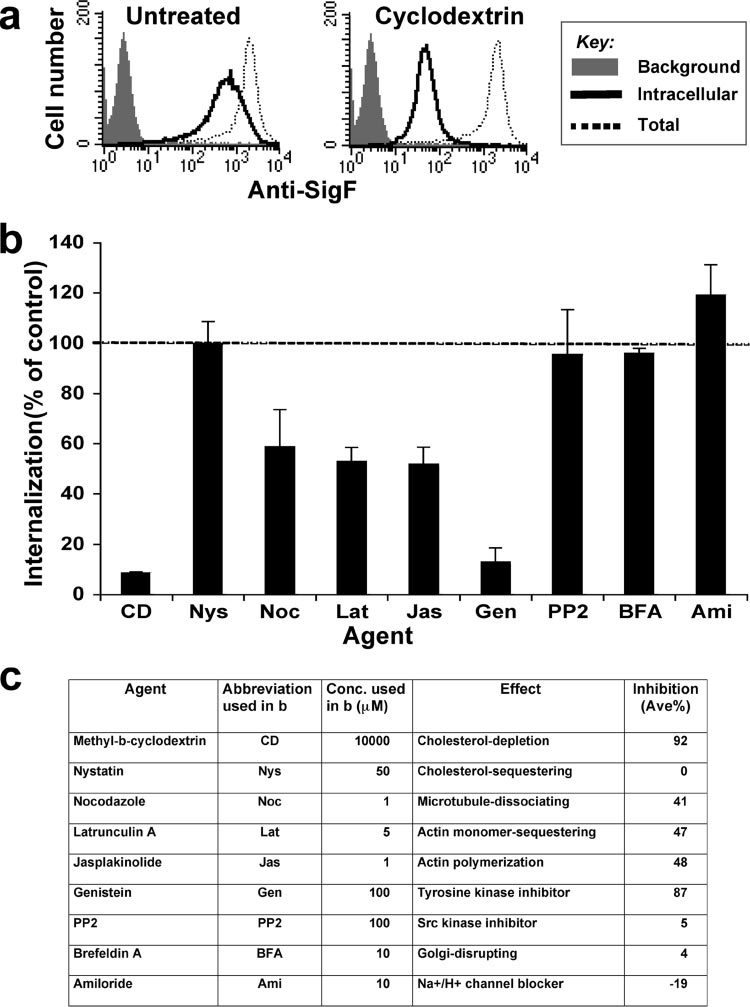 Federal Register / Vol. 75, No. 169 / Wednesday, September 1, 2010 / Notices (8) Narrow woven ribbons comprised Countervailing Duty Order merchandise in an amount equal to the at least 85 percent by weight of threads According to section 706(b)(2) of the net countervailable subsidy rates noted having a denier of 225 or higher; Act, duties shall be assessed on subject

GUIDELINES FOR THE MANAGEMENT OF THE INFANT WITH NEONATAL ABSTINENCE SYNDROME Background Neonatal Abstinence Syndrome (NAS) is a syndrome of drug withdrawal observed in infants of mothers physically dependent on drugs. Also known as neonatal withdrawal syndrome or passive addiction, NAS is a condition resulting from exposure in utero or postnatal exposure to opioids and other illicit drugs. It is more common in infants born to opioid-dependent women than in infants born to women dependent on other drugs or alcohol.1