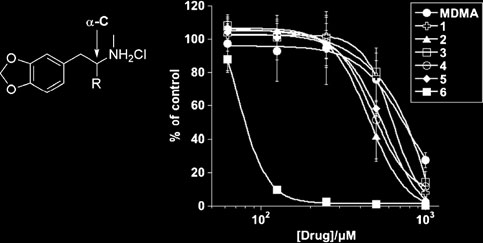 Hill coefficient ± SEM
3.39 ± 0 09
3.89 ± 1 12
3.10 ± 0.02
3.36 ± 0 06
4.56 ± 0 98
3.15 ± 0 01
3.4 ± 0 93
3.42 ± 0.03
4.79 ± 0.77
3.20 ± 0.07
3.40 ± 0.81
4.12 ± 0.03
4.65 ± 0.31
Fig. 1 Cytotoxic efficacy of MDMA and Series 1 (first generation) b typical concentration-response curves showing cytotoxic perfor- MDMA analogues versus L3055 Burkitt's lymphoma cells.
mance of MDMA and Series 1 analogues against the L3055 BL cell a Chemical structure of MDMA with α-carbon (α-C) indicated (and line. Cells were cultured at 5 x 105/ml with MDMA or indicated in tabulated right hand panel) MDMA analogues with the first analogue at concentrations shown for 48 h prior to measuring iteration of α-C substituents constituting Series 1 compounds 1–6 as cytotoxicity by PI uptake using flow cytometry. Results are repre- shown, together with calculated pIC50 ± SEM and Hill coefficients ± sented as the mean of three independent experiments ± SEM in terms SEM from response curves as generated in (b) with number of of the percentage of cells remaining viable with respect to vehicle (no separate experiments performed with each compound given as ‘n'; the benzene ring possessing all six carbons within one acceptor and therefore adds to the hydrophobicity of the plane (sp2-hybridized) by contrast to the cyclohexyl group, molecule [Metabolic stability is also increased by where the carbon atoms are sp3-hybridized and therefore the inclusion of fluorine.
non-planar and conformationally flexible. Compound 8 has Compounds 16, 17 and 18 have much larger hydrophobic an α-benzyl group and thus an additional sp3-hybridized substituents at the α-position of MDMA, and therefore carbon between the main carbon chain and the aromatic α- increased lipophilicity. The naphthyl group (compounds 16 substituent. This provides additional flexibility compared to and 17) is highly rigid as all the carbon atoms are positioned phenyl substituents, and extends the aromatic ring from the in one plane, whereas the biphenyl group differs from main chain, exploring the depth of a putative hydrophobic compound 6 by the addition of a para-phenyl group and pocket in the target receptor(s).
therefore both of the benzene rings are able to rotate around Compounds 9, 10 and 11 are more polar than their parent the axis of the bond between them.
(6) due to the addition of a methoxy group. The lone pairs From results presented in Fig. it can be noted that from of electrons make the methoxy oxygens hydrogen bond the second generation of MDMA analogues modified at the acceptors, and also increase the electron density in the α-carbon, compounds 16–18 were by far the most potent aromatic ring. Compounds 9–11 differ only in the position regards cytotoxicity towards L3055 cells; compounds 17 of the methoxy group. Similarly, compounds 13, 14 and 15 and 18 being the most efficacious and equipotent with a possess ortho-, meta-, and para-methyl groups, respectively, pIC50=5.18±0.03 and 5.22±0.08; representing a 10-fold exploring steric tolerance within the binding site(s). The and 100-fold improvement over compound 6 and MDMA ortho-substituents in 9 and 13 are also likely to reduce the respectively. Similar rank potency of these analogues was range of low energy conformations available to the side observed when assessed for their capacity to inhibit 3H- thymidine incorporation into L3055 cells (data not shown).
Compound 12 contains fluorine in the para-position It should be noted that all compounds tested for which reduces electron density in the aromatic ring but concentration-dependent cytotoxicity generated steep otherwise is very similar to a hydrogen atom (i.e. an response curves yielding relatively high Hill coefficients isosteric replacement). Although the fluorine atom has three (Figs. and ) suggesting deviation from simple mass lone pairs of electrons, it is a very poor hydrogen bond interaction ]. 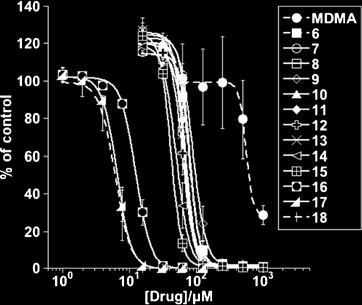 Hill coefficient ± SEM
4.10 ± 0.04
6.56 ± 0.43
4.16 ± 0 03
5.92 ± 0 58
4.04 ± 0.04
4.82 ± 0.38
4.10 ± 0.01
6.05 ± 0.16
4.16 ± 0.02
5.60 ± 0.73
4.20 ± 0.02
5.89 ± 1.12
4.20 ± 0.05
6.68 ± 073
4.29 ± 0.05
5.05 ± 0.17
4.37 ± 0.03
5.69 ± 0.27
4.90 ± 0.02
4.04 ± 0.74
5.18 ± 0.03
4.38 ± 0.73
5.22 ± 0.08
5.05 ± 0.97
Fig. 2 Cytotoxic efficacy of Series 2 (second generation) analogues versus L3055 Burkitt's lymphoma cells. As in Fig. but here with Series 2compounds 7–18; MDMA again included for comparison Cytotoxic efficacy of selected α-substituted MDMA (primarily detecting active caspase-3) and propidium iodide analogues towards B-cell lines of different malignant (plasma membrane permeability) staining, L3055 BL cells transfected with empty vector showed classic progressionfrom early to late apoptosis over the course of the 6 h The constituent cells of B-cell lines from a diverse monitored (Fig. ). While at the fixed concentration of the range of malignancies were treated with MDMA and six analogues used L3055-Bcl-2 cells again showed a degree of of the α-substituted MDMA analogues (selected accord- resistance to their cytotoxic actions, nevertheless the death ing to their activity versus sensitive L3055 cells and that occurred failed to register an ‘early apoptosis' stage at applied at a concentration at or close to their maximal any time point as indicated by cells staining as PhiPhiLux+/ cytotoxic performance against this cell line) then PI-. While no PhiPhiLux positivity was developed with analysed for remaining viability (Fig. Given the compound 6, compound 18 progressively moved a portion resistance often afforded to therapeutic regimens by of cells to what is conventionally considered a ‘late dysregulated/overexpressed BCL2 in B-cell lymphoma, apoptotic' stage: PhiPhiLux+/PI+. However, assessing cells were simultaneously assessed for Bcl-2 protein engagement of the apoptotic machinery by alternative more content (vs calnexin standard) by Western blotting. The direct methods gave no evidence for compound 18 origin of cells spanned patients additional to those provoking this pathway in L3055-Bcl-2 cells. Thus the diagnosed with BL (L3055 series; KHM2B): precursor specific detection of active caspase-3 by antibody revealed acute lymphoblastic leukemia (LILA), pro-lymphocytic leu- its appearance in response to compounds 6 and 18 in kemia (JVM2), mantle cell lymphoma (Rec-1; NCEB-1), L3055-VC but not in L3055-Bcl-2 cells (Fig. Like- primary mediastinal B-cell lymphoma (K1106), diffuse large wise, the cleavage of poly (ADP-ribose) polymerase B-cell lymphoma (K422; DoHH2), multiple myeloma (PARP) ], as shown occurring in L3055-VC cells with (KMS11; H929). Immortalized B-cell lines generated from the well characterized apoptosis-inducing agent anti-IgM, the peripheral blood of three donors by transformation with was also seen on application of MDMA and here more Epstein-Barr virus (EBV) were also included (HCD1; AT-AY; potently with compounds 16, 17, and 18 whereas L3055- ViWo)—EBV being invariably linked to endemic BL, PTLD Bcl-2 cells revealed little if any PARP cleavage in response (post-transplant lymphoproliferative disease) and a high to any of the agents applied (Fig. JC-1 staining to proportion of HIV-associated lymphoma.
indicate collapse of mitochondrial potential similarly MDMA and its analogues were set at concentrations supported the different routes to cell death by analogs displaying maximal/near-maximal impact on L3055 cell depending on the expression of Bcl-2 in L3055 BL cells viability to serve as a reference. At these concentrations (data not shown).
each of the analogues tested displayed (albeit a varyingdegree of) cytotoxicity against the spectrum of malignan- Mechanisms and pathways to lymphoma cell killing cies included. The best compound (18) showed a consis- by selected α-substituted MDMA analogues tently substantive impact against each of the subtypes. Asreported previously Bcl-2 content showed some degree Depending upon cell type and system studied, MDMA has of correlation with a cell's ability to resist killing from been purported to provoke toxicity via a diverse array of MDMA. With each of the analogues, however, there wasscant correlation between Bcl-2 protein level and extent of Fig. 3 Cytotoxic performance of MDMA and selected analogues b against B-cell lines of different malignant derivation and relation- cytotoxicity observed (Fig. ). To assess the influence of ship to Bcl-2 expression. a Cells from lines as shown plated at 5 x Bcl-2 directly, a detailed concentration-dependent response 105/ml and cultured for 24 h with compounds indicated prior to was established for the cytotoxic efficacy of the analogues assessing (absolute) % viability of population as in Fig.
against L3055 cells transfected with empty vector versus Concentration of drug applied as follows: MDMA, 2000 μM;compound 6, 500 μM; compound 12, 250 μM; compound 15, cells expressing the BCL2 transgene. The latter were only 125 μM; compound 16, 31.25 μM; compound 17, 31.25 μM; marginally more resistant (approximately a single log2 compound 18, 31.25 μM. Below is shown representative western difference) to each of the analogues than cells negative for blot analysis of Bcl-2 protein levels amongst the lines together with Bcl-2 expression (Fig. ). This was consistent for cells calnexin blotting control. Next are shown regression plots with Rvalues generated from remaining % viability in response to plated at relatively low or high starting density.
compound versus relative Bcl-2 content amongst the lines tested; bconcentration-response curves to compounds of L3055 cells carrying Mode of cell death induced by selected first and second empty vector (L3055-VC) or a Bcl-2 transgene (L3055-Bcl2). Cells were generation α-substituted MDMA analogues plated at two different starting densities, 105 cells/ml and 5x105 cells/mlas indicated, and incubated with compound for 24 h prior toassessing viability/cytotoxicity as in Fig. Results represent the When assessing cell integrity in response to compound 6 at mean of three independent experiments ± SEM given as % viability 500 μM and compound 18 at 31.25 μM by dual PhiPhiLux relative to vehicle control 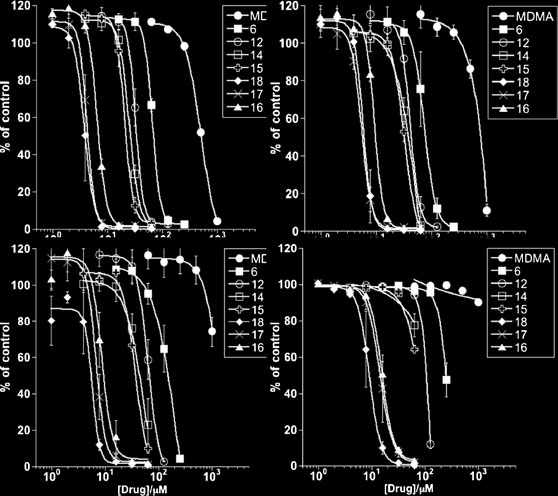