Strand Passage by DNA-Topoisomerase Figure 2. Unbraiding burst sizes. (A) Burst sizes estimated from the braid length in fluorescence images. (B) Burst sizes in terms of braid turns;the braid length was converted to braid turns using the calibration equation described in Figure S3. For both panels, dots show individualobservations, plotted in two or three lines for clarity. Large circles show averages for the first (blue or purple), second (green), and third (cyan) bursts,counterclockwise (CCW) and clockwise (CW) braids not distinguished. The averages are for the data in which unbraiding was confirmed as a changein braid length (dots in the central white zone). Dots in the top shaded zone indicate cases where a braid completely disappeared by the time thetension was set up (time 0). The shaded zone below vertical zero shows cases where a length change was undetected but mechanical unwinding atthe end (300 s) revealed remaining braid turns of less than 30. The bottom shaded zone is for no reaction cases where the braid number remained 30until 300 s as confirmed by mechanical unwinding. Insets at top right show histograms of unbraided length/turns at 3.7 pM topo IIa; ud, undetected;nr, no reaction.
doi:10.1371/journal.pone.0034920.g002 the two ends of the cleaved G-segment DNA are widely separated KCl+100 mM NaCl) which would favor processivity [13], that for ,1 s and then come close (and possibly religated) for another their DNAs were crossed at shallower angles and attached to one ,1 s. Such a behavior, observed in the absence of a T segment to bead (one of the two DNAs might have been slack, precluding the be transported, would warrant processivity in that topoisomerase detection of complete unbraiding), that they worked at a higher II residing on a G segment is ready to transport through it many [topoisomerase] of ,30 pM, and that their enzyme was of other T segments when they come by diffusion. In contrast to the Drosophila melanogaster. For a single topoisomerase molecule to report by Charvin et al. [7], however, total unbraiding in one burst completely undo a braid in an X-shaped DNA pair with 100% was rare in our experiments. We have no definite explanation, success, the enzyme would have to somehow move along the DNA except to point out that they worked at somewhat lower ionic not randomly but in the direction toward the braid center (see strength (50 mM KCl+50 mM NaCl compared to our 50 mM Figure 4A). DNA, however, is basically symmetric, and topoisom- Figure 3. Waiting times before an unbraiding reaction starts, measured from time 0 (for first bursts) or from the preceding burst(second and third bursts). Observations were terminated at 300 s. (A) Experiments with a 30-turn braid shown in Figure 2. (B) Experiments with asingle-cross braid, attempted after an experiment in A when the DNA pair remained intact. See Figure 2 for symbols. Note that the averages areshown only for [topo IIa] = 3.7 pM, because the cases of no reaction (top shaded zone) or premature unbraiding (bottom shaded zone) introduce toomuch ambiguity. In the averages for the first bursts, the waiting times for the no reaction cases are taken as 300 s, leading to underestimates. Secondand third bursts are also underestimated because of the 300-s limitation in the total observation time. Insets at top right show histograms of waitingtimes at 3.7 pM topo IIa; nr, no reaction.
doi:10.1371/journal.pone.0034920.g003 PLoS ONE www.plosone.org April 2012 Volume 7 Issue 4 e34920 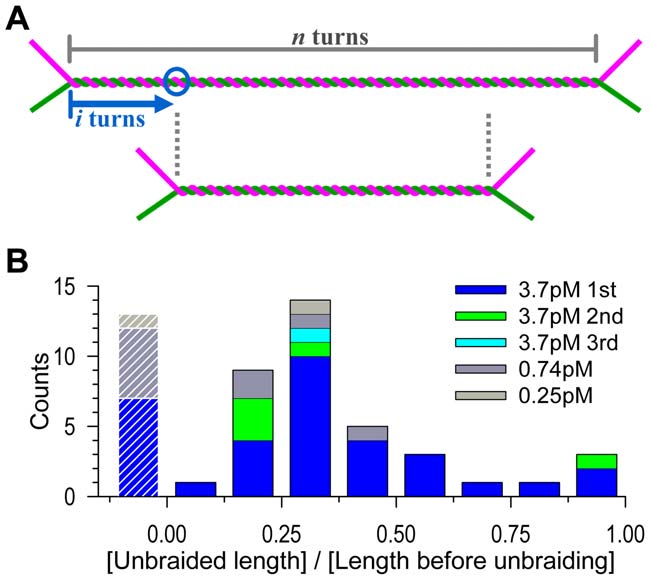 MULTIPLE CHOICE. Choose the one alternative that best completes the statement or answers the question. 1) Agents that kill bacteria are said to be A) bacteriostatic. B) inhibitory. C) bacteriocidal. D) all of the above. 2) Compared with decontamination, disinfection is