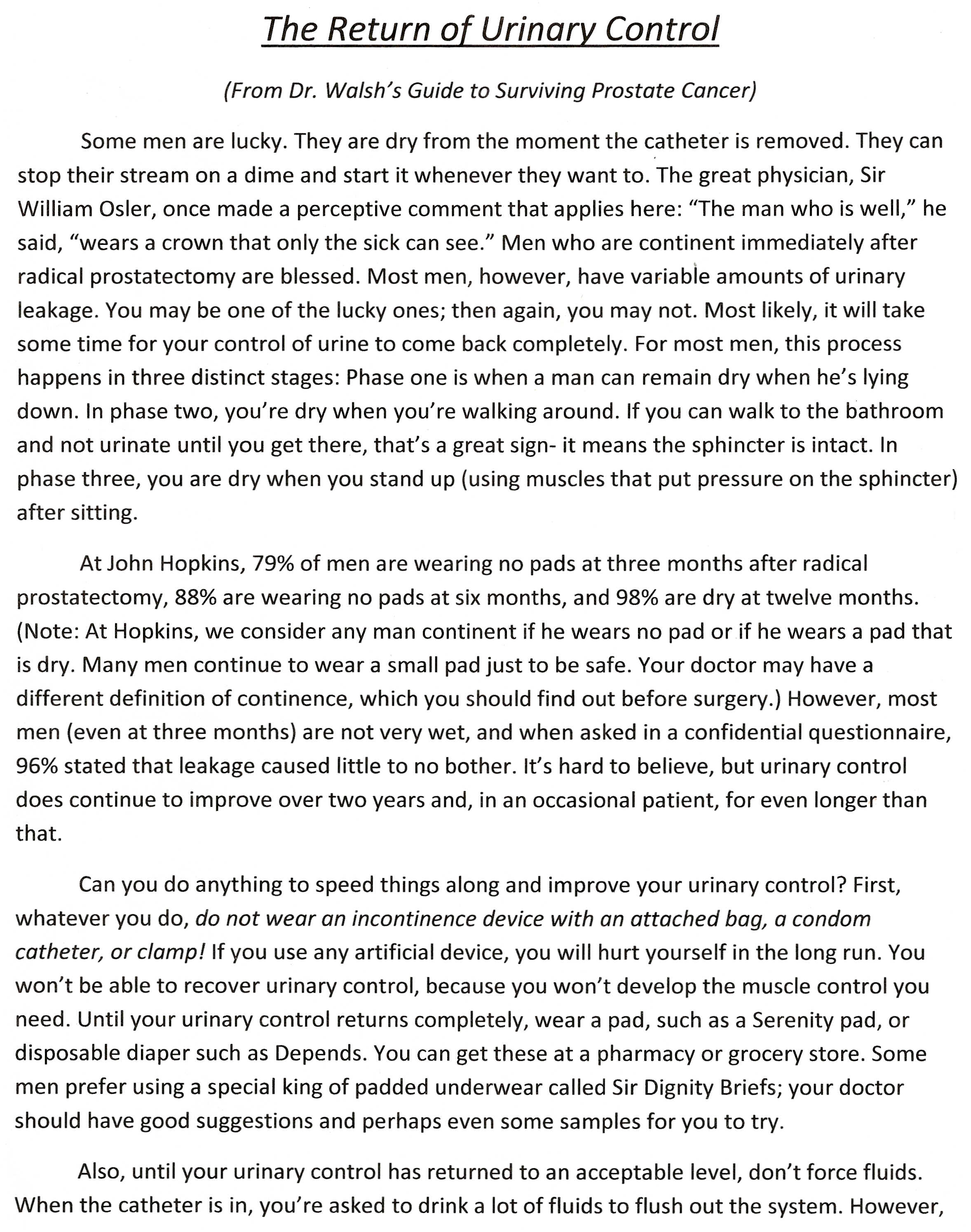 The Return of Urinary Control
Some men are lucky. They are dry from the moment the catheter is removed. They can stop their stream on a dime and start it whenever they want to. The great physician, Sir William Osler, once made a perceptive comment that applies here: "The man who is well," he said, "wears a crown that only the sick can see." Men who are continent immediately after radical prostatectomy are blessed. Most men, however, have variabie amounts of urinary leakage. You may be one of the lucky ones; then again, you may not. Most likely, it will take some time for your control of urine to come back completely. For most men, this process happens in three distinct stages: Phaseone is when a man can remain dry when he's lying down. In phase two, you're dry when you're walking around. If you can walk to the bathroom and not urinate until you get there, that's a great sign- it means the sphincter is intact. In phase three, you are dry when you stand up (using muscles that put pressure on the sphincter) after sitting.
At John Hopkins, 79% of men are wearing no pads at three months after radical prostatectomy, 88% are wearing no pads at six months, and 98% are dry at twelve months.
(Note: At Hopkins, we consider any man continent if he wears no pad or if he wears a pad that is dry. Many men continue to wear a small pad just to be safe. Your doctor may have a different definition of continence, which you should find out before surgery.) However, most men (even at three months) are not very wet, and when asked in a confidential questionnaire, 96% stated that leakage caused little to no bother. It's hard to believe, but urinary control does continue to improve over two years and, in an occasional patient, for even longer than Can you do anything to speed things along and improve your urinary control? First, whatever you do, do not wear an incontinence device with an attached bag, a condom catheter, or clamp! If you use any artificial device, you will hurt yourself in the long run. You won't be able to recover urinary control, because you won't develop the muscle control you need. Until your urinary control returns completely, wear a pad, such as a Serenity pad, or disposable diaper such as Depends. You can get these at a pharmacy or grocery store. Some men prefer using a special king of padded underwear called Sir Dignity Briefs; your doctor should have good suggestions and perhaps even some samples for you to try.
Also, until your urinary control has returned to an acceptable level, don't force fluids.
When the catheter is in, you're asked to drink a lot of fluids to flush out the system. However,

once the catheter is out,· you've got to slow the pace considerably. Avoid drinking excessive amounts of fluids, and stay away from caffeine in all forms- coffee, teas, and even soft drinks.
Caffeine is a powerful pharmacologic agent that increases the frequency and urgency with which you need to urinate. (Note: If you are being treated for high blood pressure with an alpha-adrenergic antagonist such as Cardura (doxazosin) ask your doctor to put you on a different kind of drug. Also, if you were taking Flomax (tamsulosin) for BPH,you should discontinue it. Cardura and Flomax make the sphincter relax and can make incontinence Next, every time you urinate, do it standing up. You can't practice the following exercises, which strengthen the external sphincter and speed up your recover of urinary control, while you're sitting down.
Start your stream, and once it's in full force, stop the stream by contracting then muscles in your buttocks- not your abdominal muscles, not the muscle up in front around the penis. Tighten your buttocks; imagine you're trying to hold a quarter between your cheeks.
Hold the urine back for five or ten seconds, and repeat as many times as you can. Note: Perform these exercises only when you're urinating; if you keep contracting these muscles throughout the day, you'll overdo it. The sphincter tires easily, and you'll end up wetter than you would be otherwise.
Remember, for many men, the recovery of urinary control is a slow process. The most important thing you can do during this time is not get discouraged. If your doctor told you there was only a 2% chance that you would have a long-term, serious problem with urinary control, believe it. This means there's a 98% chance that you'll be back to normal someday, even if no crystal ball can say exactly when. It will help for you to discuss your progress at regular intervals with your urologist-even a phone call every so often can make a world of difference in how you see your progress. It may also help for you to take part in a support group so you can talk about the issues that are bothering you with other men who are in the same boat, going through the same process of recovery. You can do this online, from the privacy of your own home (this may be better if you are uncomfortable talking about personal matters in front of others), or you can find a local prostate cancer support group. Ask your If you are experiencing no progress, it's reasonable to consider whether something else- other than the natural, gradual return of urinary control-could be causing the delay. One 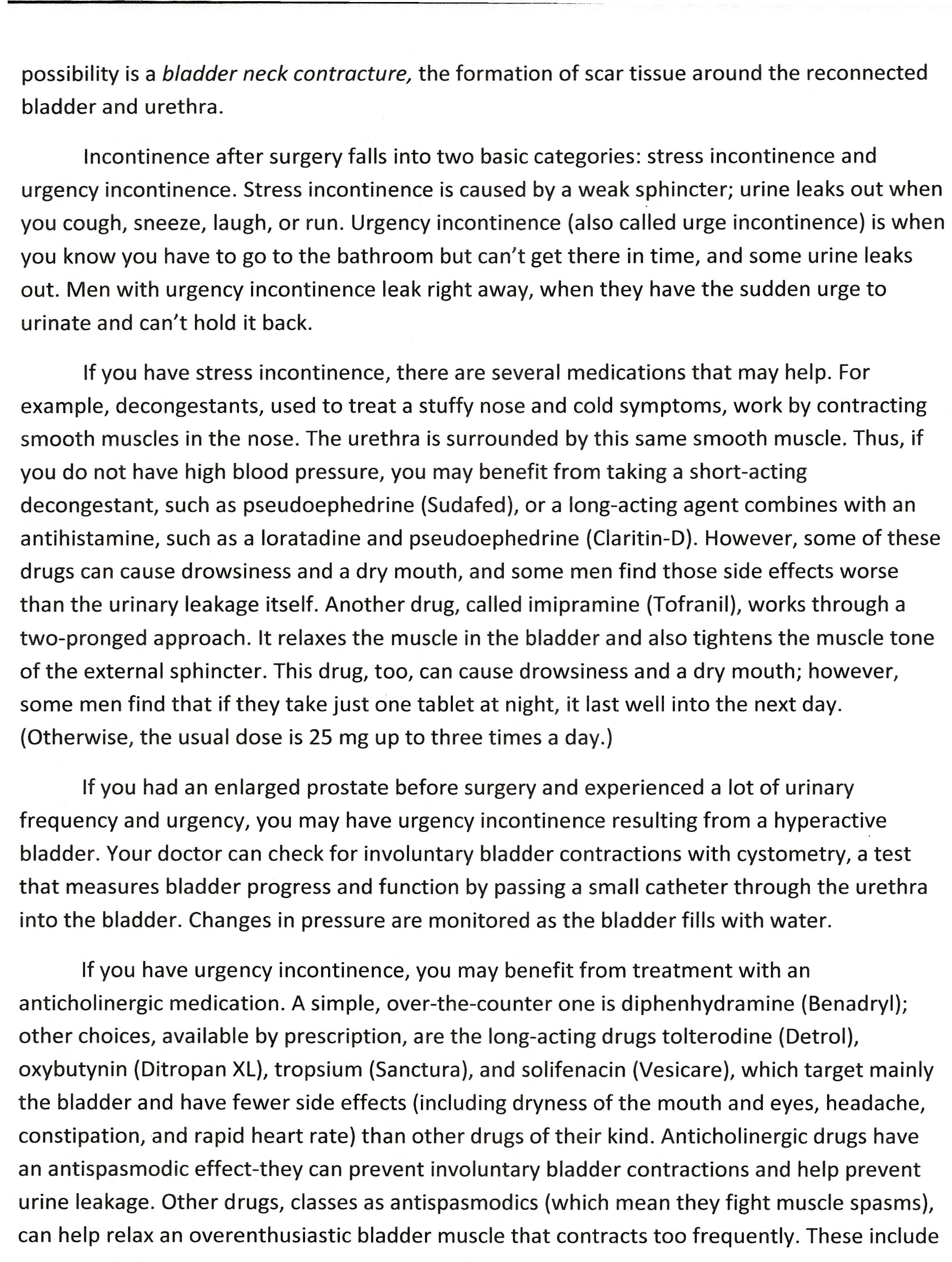 possibility is a bladder neck contracture, the formation of scar tissue around the reconnected bladder and urethra.
Incontinence after surgery falls into two basic categories: stress incontinence and urgency incontinence. Stress incontinence is caused by a weak sphincter; urine leaks out when you cough, sneeze, laugh, or run. Urgency incontinence (also called urge incontinence) is when you know you have to go to the bathroom but can't get there in time, and some urine leaks out. Men with urgency incontinence leak right away, when they have the sudden urge to urinate and can't hold it back.
If you have stress incontinence, there are several medications that may help. For example, decongestants, used to treat a stuffy nose and cold symptoms, work by contracting smooth muscles in the nose. The urethra is surrounded by this same smooth muscle. Thus, if you do not have high blood pressure, you may benefit from taking a short-acting decongestant, such as pseudoephedrine (Sudafed), or a long-acting agent combines with an antihistamine, such as a loratadine and pseudoephedrine (Claritin-D). However, some of these drugs can cause drowsiness and a dry mouth, and some men find those side effects worse than the urinary leakage itself. Another drug, called imipramine (Tofranil), works through a two-pronged approach. It relaxes the muscle in the bladder and also tightens the muscle tone of the external sphincter. This drug, too, can cause drowsiness and a dry mouth; however, some men find that if they take just one tablet at night, it last well into the next day.
(Otherwise, the usual dose is 25 mg up to three times a day.) If you had an enlarged prostate before surgery and experienced a lot of urinary frequency and urgency, you may have urgency incontinence resulting from a hyperactive bladder. Your doctor can check for involuntary bladder contractions with cystometry, a test that measures bladder progress and function by passing a small catheter through the urethra into the bladder. Changes in pressure are monitored as the bladder fills with water.
If you have urgency incontinence, you may benefit from treatment with an anticholinergic medication. A simple, over-the-counter one is diphenhydramine (Benadryl); other choices, available by prescription, are the long-acting drugs tolterodine (Detrol), oxybutynin (Ditropan XL), tropsium (Sanctura), and solifenacin (Vesicare), which target mainly the bladder and have fewer side effects (including dryness of the mouth and eyes, headache, rapid heart rate) than other drugs of their kind. Anticholinergic drugs have an antispasmodic effect-they can prevent involuntary bladder contractions and help prevent urine leakage. Other drugs, classesas antispasmodics (which mean they fight muscle spasms), can help relax an overenthusiastic bladder muscle that contracts too frequently. These include 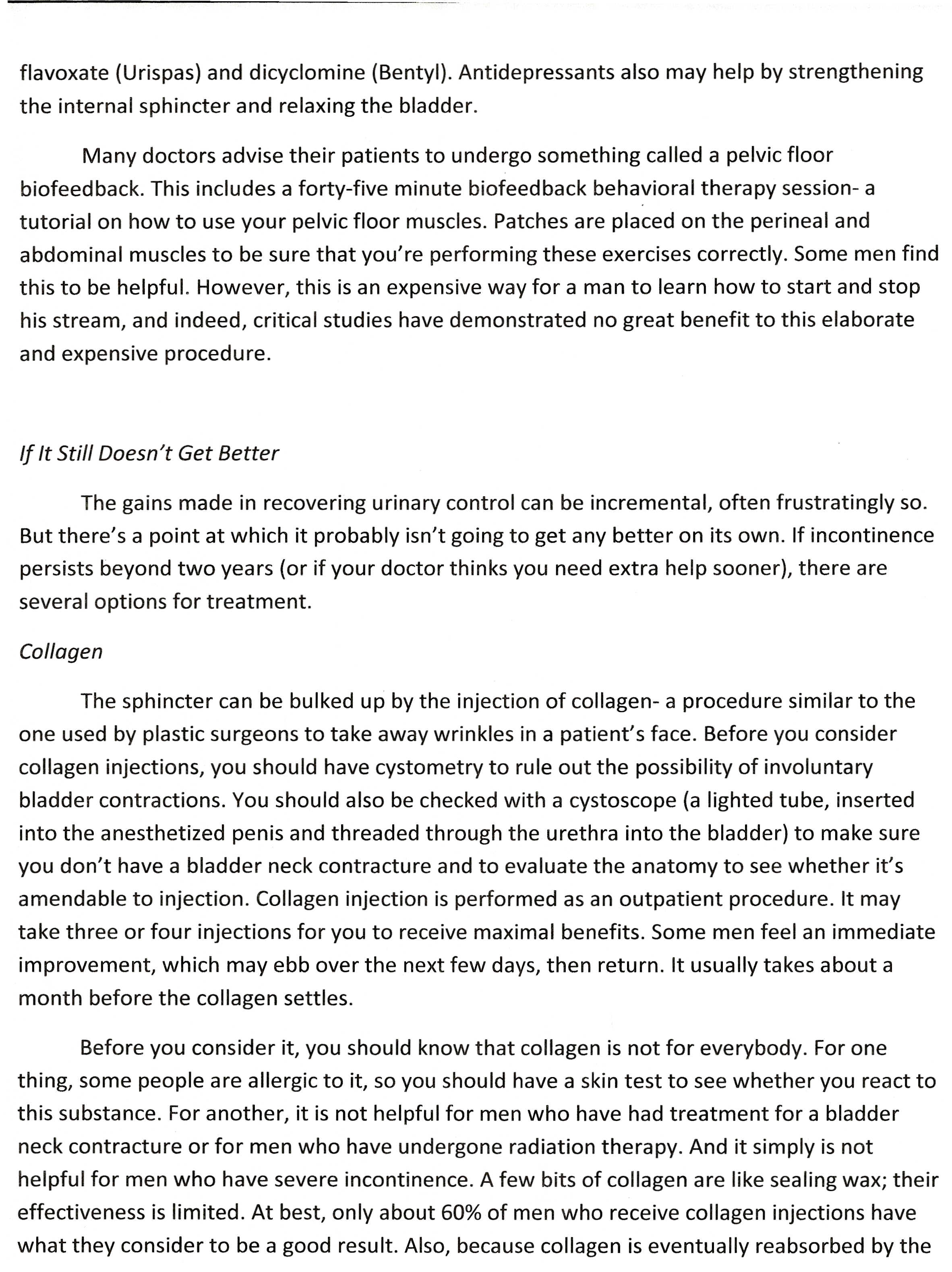 flavoxate (Urispas) and dicyclomine (Bentyl). Antidepressants also may help by strengthening the internal sphincter and relaxing the bladder.
Many doctors advise their patients to undergo something called a pelvic floor biofeedback. This includes a forty-five minute biofeedback behavioral therapy session- a tutorial on how to use your pelvic floor muscles. Patches are placed on the perineal and abdominal muscles to be sure that you're performing these exercises correctly. Some men find this to be helpful. However, this is an expensive way for a man to learn how to start and stop his stream, and indeed, critical studies have demonstrated no great benefit to this elaborate and expensive procedure.
The gains made in recovering urinary control can be incremental, often frustratingly so.
But there's a point at which it probably isn't going to get any better on its own. If incontinence persists beyond two years (or if your doctor thinks you need extra help sooner), there are several options for treatment.
The sphincter can be bulked up by the injection of collagen- a procedure similar to the one used by plastic surgeons to take away wrinkles in a patient's face. Before you consider collagen injections, you should have cystometry to rule out the possibility of involuntary bladder contractions. You should also be checked with a cystoscope (a lighted tube, inserted into the anesthetized penis and threaded through the urethra into the bladder) to make sure you don't have a bladder neck contracture and to evaluate the anatomy to see whether it's amendable to injection. Collagen injection is performed as an outpatient procedure. It may take three or four injections for you to receive maximal benefits. Some men feel an immediate improvement, which may ebb over the next few days, then return. It usually takes about a month before the collagen settles.
Before you consider it, you should know that collagen is not for everybody. For one thing, some people are allergic to it, so you should have a skin test to see whether you react to this substance. For another, it is not helpful for men who have had treatment for a bladder neck contracture or for men who have undergone radiation therapy. And it simply is not helpful for men who have severe incontinence. A few bits of collagen are like sealing wax; their effectiveness is limited. At best, only about 60% of men who receive collagen injections have what they consider to be a good result. Also, because collagen is eventually reabsorbed by the 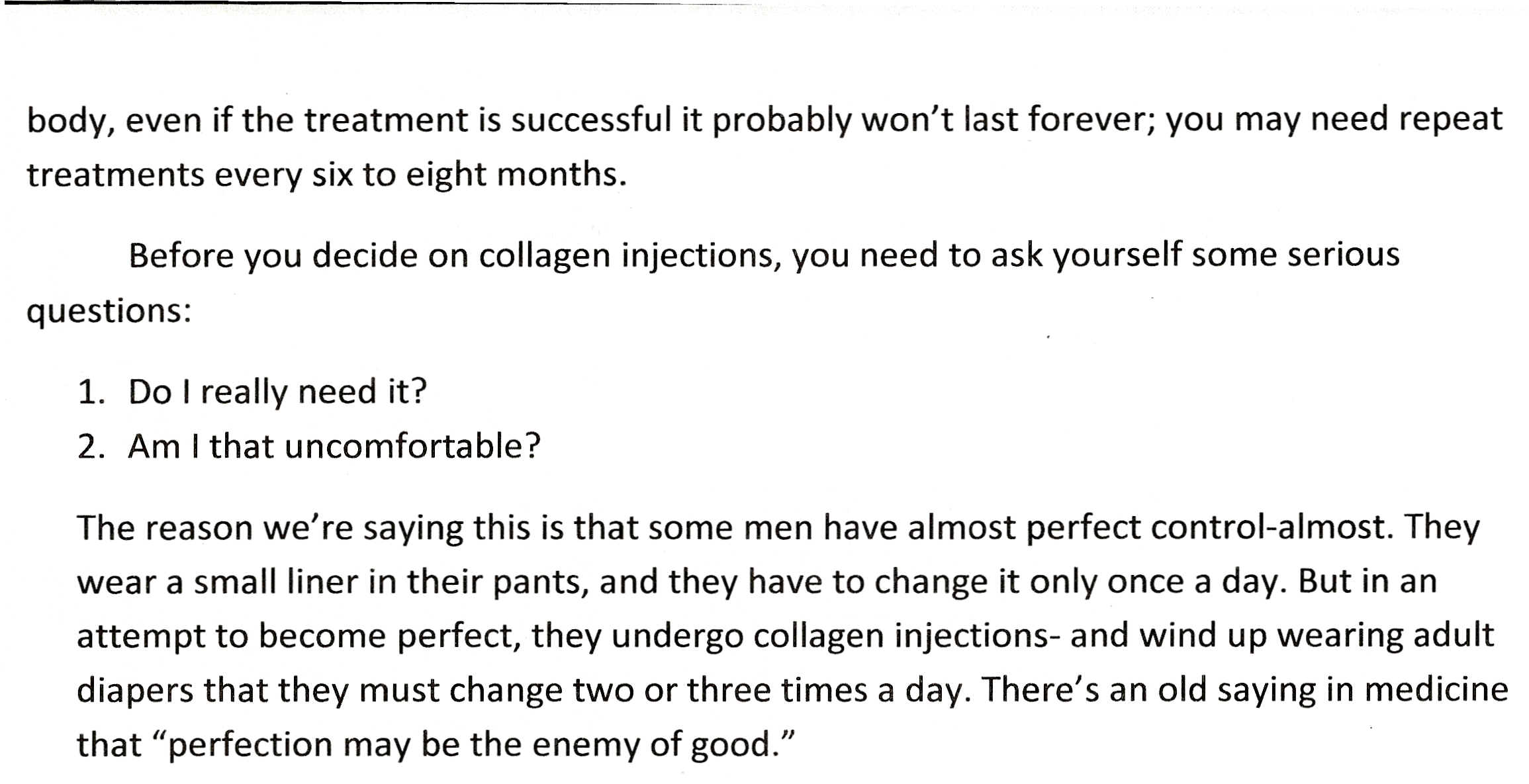 body, even if the treatment is successful it probably won't last forever; you may need repeat treatments every six to eight months.
Before you decide on collagen injections, you need to ask yourself some serious 1. Do I really need it? 2. Am I that uncomfortable? The reason we're saying this is that some men have almost perfect control-almost. They wear a small liner in their pants, and they have to change it only once a day. But in an attempt to become perfect, they undergo collagen injections- and wind up wearing adult diapers that they must change two or three times a day. There's an old saying in medicine that "perfection may be the enemy of good."

British Journal of Clinical Pharmacology Age dependent systemic exposure to inhaledsalbutamol Klaus Bønnelykke, Jakob Jessing Jespersen & Hans BisgaardDanish Pediatric Asthma Center; Copenhagen University Hospital, Gentofte, DK-2900 Copenhagen, Denmark What is already known about this subject What this study adds • There is only scant evidence on how to adjust the dose