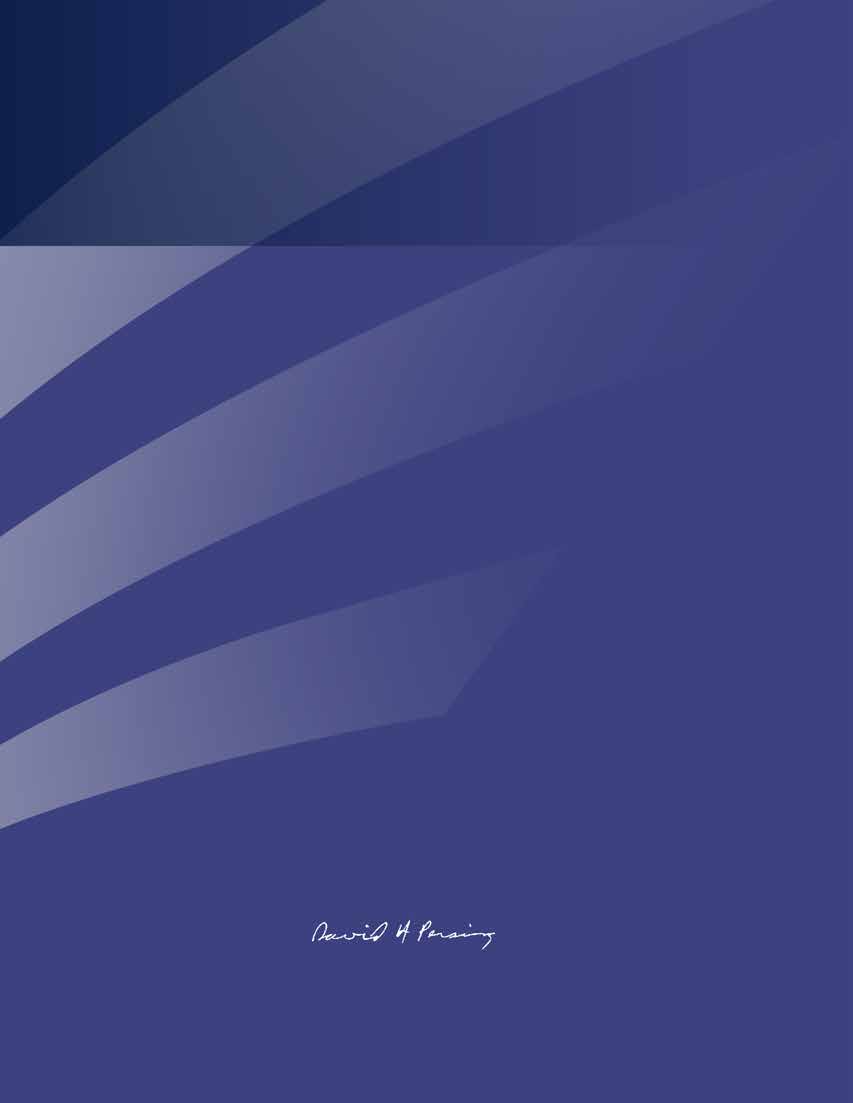 CONTENTS WINTER 2013 COVER STORY 3
David Persing, M.D., Ph.D.
Influenza today: Case Study Award: Still a hot topic on Cepheid Xpert® Flu Assay Ellen Jo Baron, Ph.D.
Results: Positive in More Contributing Authors Fred Tenover, Ph.D.
Cepheid's ON DEMAND Report is distributed four times a year. We welcome communication from users of Cepheid systems and tests and invite suggestions for articles in future issues. Send correspondence to: David Persing
M.D., Ph.D.
From the Editor Cepheid ON DEMAND Report1327 Chesapeake Terrace Chief Medical and Sunnyvale, CA 94089 Technology Officer, Cepheid [email protected] sign up for e-mail notification In this issue of On Demand, Dr. Ellen Jo Baron provides a wealth of information on of new issues of Cepheid's ON our perennial foe, the influenza virus. If you want to get up to speed on this subject DEMAND Report, visitwww.cepheidondemand.com quickly, read this issue; it encapsulates much of the recent research on the flu viruses, their virulence factors, and approaches to their detection. As many of you know, rapid detection of this virus during the flu season is of significant medical value, but until Contents are 2013 by Cepheid unless recently, most of the rapid tests have not been sensitive enough to rule out influenza otherwise indicated. Rights reserved on all guest columns. The contents of this infection with a high degree of confidence. Next-generation molecular diagnostic publication may not be reproduced in any form without written permission of testing for influenza virus and specifically the Xpert® Flu cartridge represent game- the editor. The mention of trade names, changing technologies. I hope you enjoy reading this issue as much as I have.
commercial products, or organizations does not imply endorsement by Cepheid. 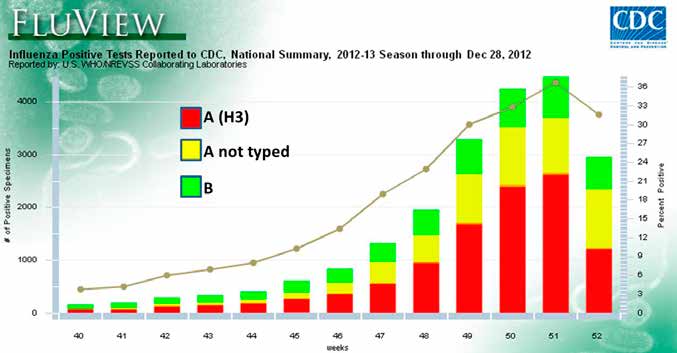 Influenza today: Still a hot topic on many fronts FIGURE 1. Chart of influenza subtypes in temperate South American zone.
Source: Available in public domain FIGURE 2. United States Influenza isolates for flu season beginning end of 2012. (http://www.cdc.gov/flu/weekly) Source: Available in public domain WINTER 2013 CEPHEID 5
Influenza today: Still a hot topic on many fronts is disconcerting. Both manuscripts were submitted for The inevitable emergence of new publication at the same time to Nature and Science, among the most prestigious and widely read scientific journals in the strain variants fueled by genetic world. These manuscripts were to generate a huge amount of public and private dialogue and controversy.3 reassortments among existing After 9/11 and the anthrax distribution in the U.S., many strains has important implications scientists and government officials felt that the information necessary to weaponize anthrax spores could have for diagnostic tests. been found in legitimate scientific literature (much like the information on how to build a bomb is available on the internet), and they wanted to censor any future publications that could be seen as helping potential bioterrorists achieve Can the rapid antigen tests developed for circulating strains their goals. This type of research is called Dual-Use Research at the time of test creation detect the new variants? Clearly of Concern (DURC), meaning that both peaceful and military they have challenges, as illustrated by the very public failure applications are possible based on the results. The academic of existing rapid antigen tests to detect the influenza A 2009 and government communities agreed that bioterrorism was novel strain8 and the H3N2v strain.9 a threat sufficient to warrant serious concern and put an official oversight function in place. The government created Both the rapid antigen tests and the antibodies used in the an advisory board, the National Science Advisory Board for direct fluorescent antibody stains used by those laboratories Biosecurity (NSABB), peopled by eminent and respected performing DFA assays were developed before avian scientists, whose job was to review publications of research influenza was considered to be a threat. Genetic tests have findings that could lead to potentially dangerous information the advantage, as they can be tailored with the addition and becoming available and being exploited for the wrong subtraction of specific primers and probes to match the purposes. The Board's focus was to decide how to protect the public from harm while not inhibiting the advancement of science. How do the current diagnostic tests fare with the influenza strains currently in circulation? The general laboratory Clearly, the two submitted manuscripts describing the genetic population was surprised to learn that the novel A H1N1 manipulations of the HPAI virus that allowed it to infect ferrets 2009 was not detected very well by the commonly used rapid by the airborne route merited review by this board. After antigen tests. Current recommendations from the CDC about much deliberation, the NSABB decided that the full protocols which diagnostic tests to use are based on that experience. should be published and available to the general public. This First of all, patients should be tested as early in their disease as decision provoked an outcry from some scientists who felt possible. Test results are less reliable at 4 days after onset of that potential security risks outweighed the free dissemination illness. The CDC recommendations state that rapid influenza of research findings. The supporters of total publication diagnostic tests (RIDT) are not very sensitive, averaging felt that partial publication (holding back key experimental sensitivities from 40-70% with a range of 10-80%.F A negative details) would have a detrimental effect on other scientists test should be confirmed with a more sensitive test, such as contemplating similar research. They felt that the information reverse transcriptase PCR or viral culture. These tests are presented could potentially lead to better control, and more sensitive, but slower. Although a truly rapid test (15-perhaps a better vaccine. The final upshot of this highly vocal 20 minutes) that could unequivocally rule out influenza would and visible rift within the influenza research community and be ideal, the state of our technology still falls short of that the broader scientific community was the publication, in full, goal. Whether the patient presents at the height of influenza of both manuscripts.2,4 Amidst many calls for better decision- season or in the middle of the summer, major decisions making in the future, the safeguards and oversight activities will be made based on the test results. Should the patient have been modified.5,6,E Still, at this time, the HPAI has not be admitted into a respiratory isolation room? Should the moved into the general population. Could our currently patient be sent home? Should the patient be given antiviral available rapid influenza tests detect H5N1 if it suddenly medication or antibiotics? An accurate test result in a timely swept into the human population? At least one group studied fashion is important to that individual patient, his or her family, two lateral flow antigen assays with samples from infected and the institution. Fortunately, there are options available for poultry.7 Rectal/genital (i.e., cloacal) swabs were less sensitive the laboratory, although all have pros and cons. for detection of HPAI H5N1 than feathers and neither sample was very sensitive compared with a molecular assay. Cloacal samples are appropriate, since infected birds shed the virus via the gastrointestinal tract. However, this result does not bode well for detection of the virus in human samples. 6 VOLUME 6, ISSUE 1 CEPHEID 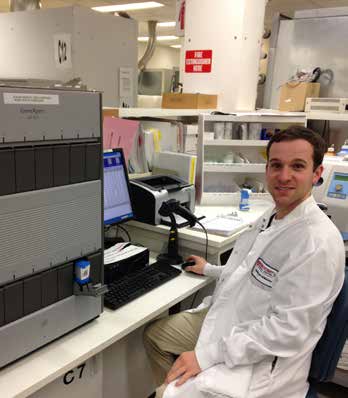 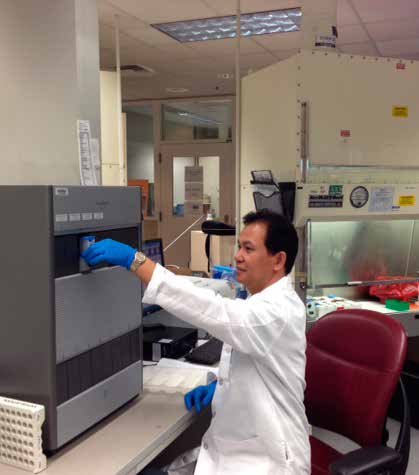