The Roles of β-Tubulin Mutations and Isotype Expression in Acquired Drug Resistance J. Torin Huzil1, Ke Chen2, Lukasz Kurgan2 and Jack A. Tuszynski11Department of Oncology, University of Alberta, Edmonton, Alberta.
2Department of Computer and Electrical Engineering, University of Alberta, Edmonton, Alberta, Abstract: The antitumor drug paclitaxel stabilizes microtubules and reduces their dynamicity, promoting mitotic arrest
and eventually apoptosis. Upon assembly of the α /β-tubulin heterodimer, GTP becomes bound to both the α and β- tubulin monomers. During microtubule assembly, the GTP bound to β-tubulin is hydrolyzed to GDP, eventually reach- ing steady-state equilibrium between free tubulin dimers and those polymerized into microtubules. Tubulin-binding drugs such as paclitaxel interact with β-tubulin, resulting in the disruption of this equilibrium. In spite of several crys- tal structures of tubulin, there is little biochemical insight into the mechanism by which anti-tubulin drugs target mi- crotubules and alter their normal behavior. The mechanism of drug action is further complicated, as the description of altered β-tubulin isotype expression and/or mutations in tubulin genes may lead to drug resistance as has been described in the literature. Because of the relationship between β-tubulin isotype expression and mutations within β-tubulin, both leading to resistance, we examined the properties of altered residues within the taxane, colchicine and Vinca binding sites. The amount of data now available, allows us to investigate common patterns that lead to microtubule disruption and may provide a guide to the rational design of novel compounds that can inhibit microtubule dynamics for specifi c tubulin isotypes or, indeed resistant cell lines. Because of the vast amount of data published to date, we will only pro- vide a broad overview of the mutational results and how these correlate with differences between tubulin isotypes. We also note that clinical studies describe a number of predictive factors for the response to anti-tubulin drugs and attempt to develop an understanding of the features within tubulin that may help explain how they may affect both microtubule assembly and stability.
Keywords: Tubulin, Microtubule, Isotype, Paclitaxel, Cancer, Resistance, Mutant.
Microtubules (MTs) are large multimeric protein complexes that form hollow cylinders. They are constructed from repeats of a heterodimer of two 55 kDa proteins known as α and β tubulin. The formation of the tubulin dimer from the α /β monomers is essentially irreversible, locking a single molecule of GTP within the non-exchangeable nucleotide binding site of α tubulin (Weisenberg et al. 1976). Following the formation of the tubulin dimer, an additional molecule of GTP binds the β-subunit and subsequent subunit addition then brings the exposed, nucleotide bound β-tubulin into contact with α-tubulin from a separate tubulin dimer (Figure 1). This results in the formation of long chains of tubulin dimers known as protofi laments. This interaction at the α/β tubulin interface, within the growing protofi laments, promotes the hydrolysis of bound GTP, providing the conformational fl exibility required during the polymerization-depolymerization cycle (Wang and Nogales, 2005). In vitro, these fi laments have been shown to associate laterally, forming sheets which are then thought to curl in on themselves to form a complete MT. MTs observed in vitro are composed of 11 to 18 individual protofi laments, whereas most microtubules that are observed in vivo are made up of only 13 (Unger et al. 1990). MTs are involved in numerous critical, cellular processes including mitosis, cellular motility, maintenance of cellular morphology, and the activity of cell surface receptors. (Pichichero and Avers, 1973; Hyams and Stebbings, 1979). Here we discuss the role of MT dynamics and how tubulin's involvement at the molecular level may affect processes such as chromosome segregation and cell division. This will be followed by a brief discussion of how this process relates directly to the chemotherapeutic treatment of cancer and the drugs that are used in this process. Finally, a discussion of the development of resistance mechanisms to these drugs and how these relate to tubulin, the expression of isotypes and acquired mutations will hopefully provide insight into the ever-increasing complexity of this system.
Correspondence: Jack A. Tuszynski. Tel: (780) 432-8906; Email: [email protected]
Cancer Informatics 2007: 3 159–181 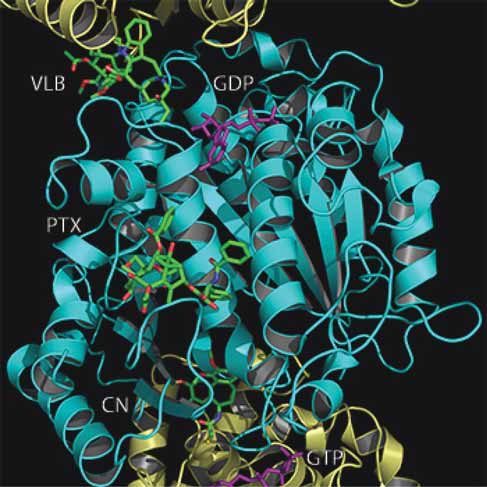 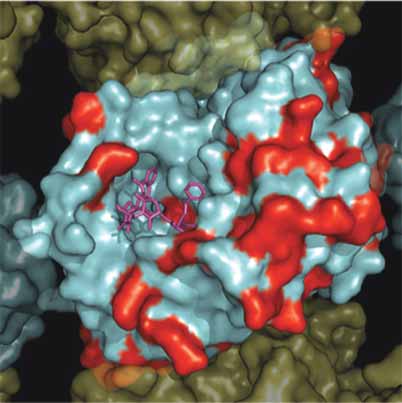 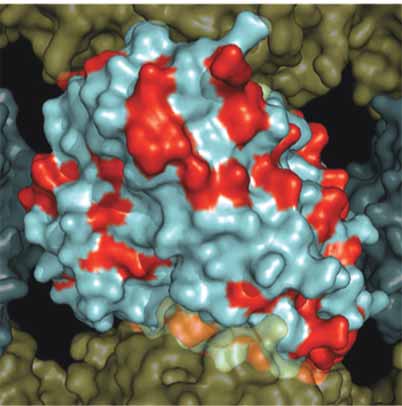 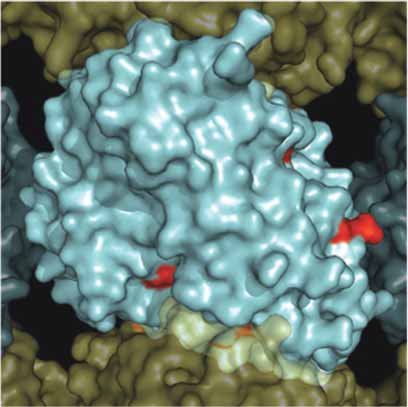 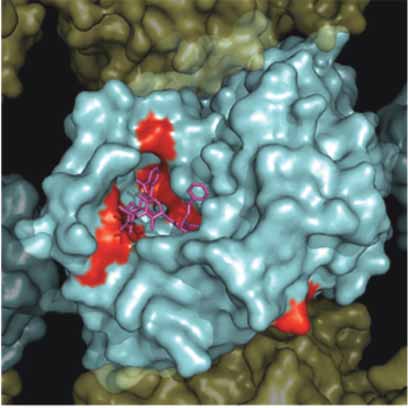 A. β-Tubuiln Mutations MT Exterior
B. β-Tubuiln Mutations MT Exterior
Figure 4. Surface map of mutation sites in mammalian β-tubulin. As in Figure 3, a solvent accessible surface was drawn onto the α /β-tubu-
lin heterodimer and assembled into a 13 protofi lament MT. Here the β-tubulin surface is colored red to illustrate the surface positions of mutations observed in Table 1. Panel A. Illustrates the MT from the interior surface and shows the binding site for paclitaxel (purple).
Panel B. Illustrates a 180° rotation about the y-axis to show the exterior surface of the microtubule.
Cancer Informatics 2007: 3 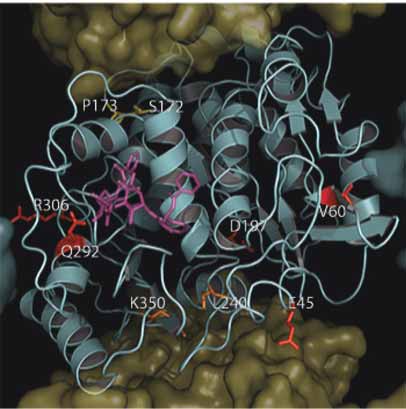 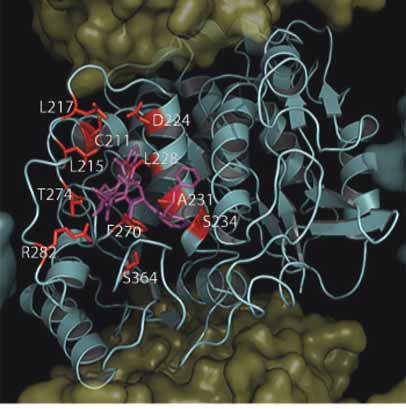 The Roles of β-Tubulin Mutations and Isotype Expression in Acquired Drug Resistance A. β-Tubuiln Mutations Within PTX Site
B. β-Tubuiln Mutations Not In PTX Site
Figure 5. Location of mutations in mammalian β-tubulin in the taxane binding site. As in Figure 3, with the exception that the β-Tubulin surface
has been removed to expose the underlying tertiary structure which is shown as a cyan cartoon. Panel A. Shows mutations found within the
taxane Binding Site (C211, L215, L217, D224, L228, A231, S234, T274, F270, R282, S364) colored red in relation to paclitaxel (purple).
Panel B. Shows residues found outside the taxane binding site (E45, V60, Q292, R306) colored red. Residues found within the Vinca binding
site (S172 and P173) are colored yellow and residues found within the colchicine binding site (L240 and K350) are colored orange.
Cancer Informatics 2007: 3 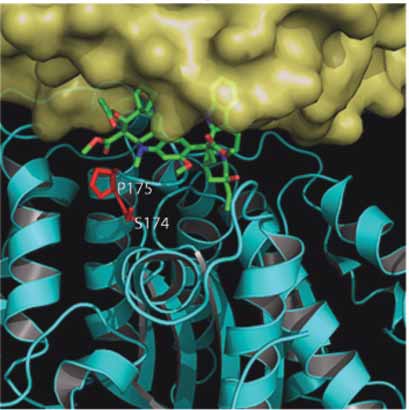