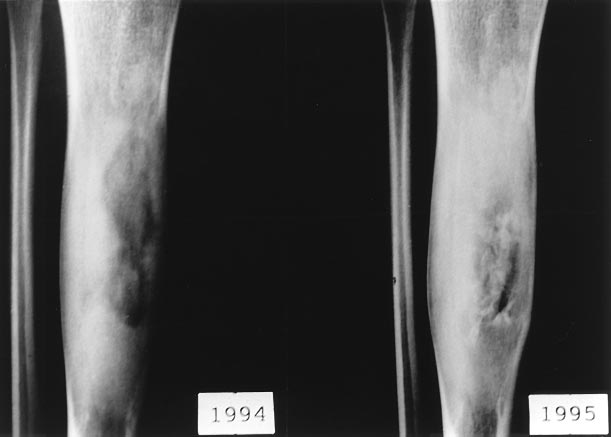 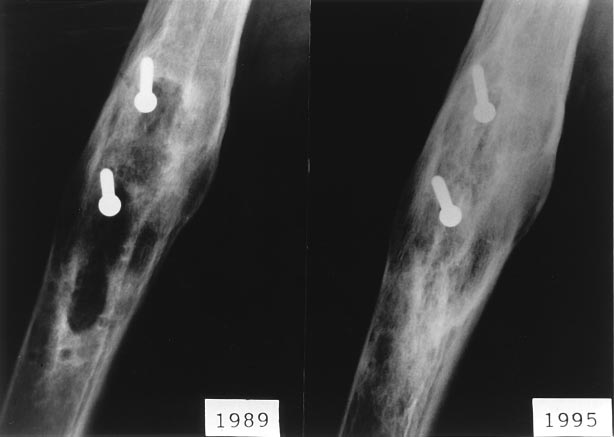 EFFECTS OF IV PAMIDRONATE
(A) Before treatment, 1994. (B) After treatment, 1995. Radiographic as-pect (A) before and (B) after threecourses of pamidronate: filling of a lyticarea.
(A) Before treatment, 1989.
(B) After treatment, 1995. Radiographicaspect (A) before and (B) after 10courses of pamidronate: filling of a lyticarea and thickening of a cortice.
obtained a response to a new course of pamidronate in all on Figs. 3A, 3B, 4A, and 4B. Seven out of the nine patients of them. Children, the two monostotic patients, and the who had a radiographic response had painful sites, and all McCune-Albright patient did not respond differently.
of them presented a clinical response.
No patient sustained a complete fracture. Four patients developed a stress line during the period of treatment.
These stress lines appeared in a dysplasic area of femur.
Radiological changes were evident in nine patients, con- Complete healing was achieved for three patients within 6 sisting in a progressive filling of osteolytic areas and in weeks of ceased weight bearing. For one of these patients cortical thickening. No obvious changes were observed in (age 13 at the beginning of treatment), the line has occurred the other 11 patients. There was neither spreading of pre- after 7 months of treatment, on a great trochanter, and has vious lesions nor appearance of new bone lesions during the increased with time, resulting in a varus of the femoral period of therapy in all patients. Among these nine patients, neck. It was necessary to undertake a surgical correction.
two had monostotic FD. A mean of 15 months (range 6 –25)was necessary to achieve a clear improvement in the radio-graphic aspect. The mean age of these patients was 32 years (range 19 –59 years). There were four females and fivemales. These characteristics were similar to those of the During the treatment period, repeated infusions of pamidr- total sample. Examples of radiological changes are shown onate led to a marked decrease of serum ALP and of urinary CHAPURLAT ET AL.
TABLE 2. BASELINE VALUES OF BIOCHEMICAL MARKERS (nmol/mmol Cr) Data shown are means 6 SD.
intake of calcium. Four patients complained of transientstiffness and bone pain located on the dysplasic areas, whichoccurred once or twice for each of them.
After three courses of pamidronate (540 mg), our younger patient (age 13 at the beginning of treatment)suffered from unusual changes of the right knee. The thick-ness of the growth plate on the medial side of both thefemur and the tibia expanded over 18 months, reminiscentof rickets. Complete healing of these lesions was observedon X-rays 12 months after cessation of treatment. A trans-iliac bone biopsy in a bone involved by fibrous dysplasiashowed clear evidence of osteomalacia (Fig. 6). A bonebiopsy was also taken in two other adult patients. Focalmineralization defects were seen in these two adult pa-tients, but without increase in the mean osteoid seam widthnor decrease in mean calcification rate measured by bone Evolution of serum alkaline phosphatase (SAP) as histomorphometry after tetracycline double labelling.
a function of time, expressed as a percentage of variation.
Comparison of SAP at each visit with baseline values (Wil- coxon match pairs test).
We provide evidence that in FD treated with intravenous type I collagen C-telopeptide (CTX). Baseline values of all pamidronate, bone pain could be alleviated, bone turnover biochemical markers measured are shown in Table 2.
could be reduced, and radiological lesions could be im- Serum ALP was significantly lower than baseline values proved. Few reports have studied the nonsurgical treatment after 6, 12, 18, 24, 30, 42, and 48 months of treatment of FD. The existence of increased bone resorption and (Fig. 5). Urinary CTX levels were reduced after treatment remodeling activity, at least in agressive forms of FD, en- by 71%, p 5 0.002, in 10 patients (12 courses).
couraged some open therapeutic trials with calcitonin in Fasting urinary excretion of hydroxyproline was also de- order to inhibit osteoclastic resorption. Bell reported a creased, but this was significant only after 12 and 18 decrease in elevated urinary excretion of hydroxyproline in months. It was also reduced after 1, 2, and 4 courses of one patient treated with calcitonin for 16 days.(20) The same treatment. For the 11 patients in whom it was measured, we effect was obtained in a 12-year-old girl treated with elca- observed a trend for a decrease of urinary pyridinoline (not tonin for 20 weeks.(17) Morii showed a decrease of serum significant: p 5 0.4).
ALP after administration of porcine calcitonin to a patient Serum calcium, phosphate, 25 hydroxyvitamin D, and with polyostotic fibrous dysplasia.(24) But Helmstedt(25) and fasting urinary excretion of calcium remained unchanged.
Yamamoto(17) did not find any change of serum ALP levels PTH had a tendency to increase, but this was significant in their patients treated with calcitonin. No report men- only after 6 months of treatment (mean 5 74%; p 5 0.038).
tioned the effects of calcitonin on clinical symptoms orX-ray abnormalities. One study reported the effects of atreatment with disodium etidronate(26) in an 18-year-old Side effects boy suffering from a polyostotic fibrous dysplasia, who had We observed some of the side effects usually described an unsuccessful attempt with calcitonin for 3 months. He with intravenous pamidronate.(24) Transient fever occurred has been treated with etidronate 400 mg/day during a 2- in eight patients after the first infusion (maximum 38.5°C), week period. This treatment did not induce any change in but this effect did not reappear with subsequent infusions of ALP and fasting urinary excretion of hydroxyproline. Be- pamidronate. Hypocalcemia (minimum: 2.05 mmol/l) was sides, these parameters were reduced after administration regularly noted after the infusions, but was seldom symp- of mithramycin, but this effect lasted only 1 week after the tomatic (four times) and was quickly corrected by oral improvement, and this treatment was poorly tolerated. 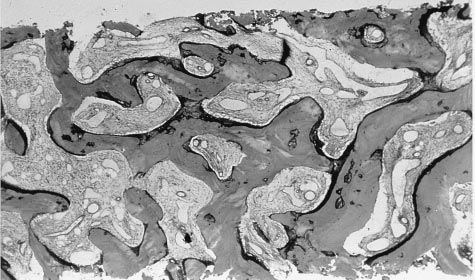