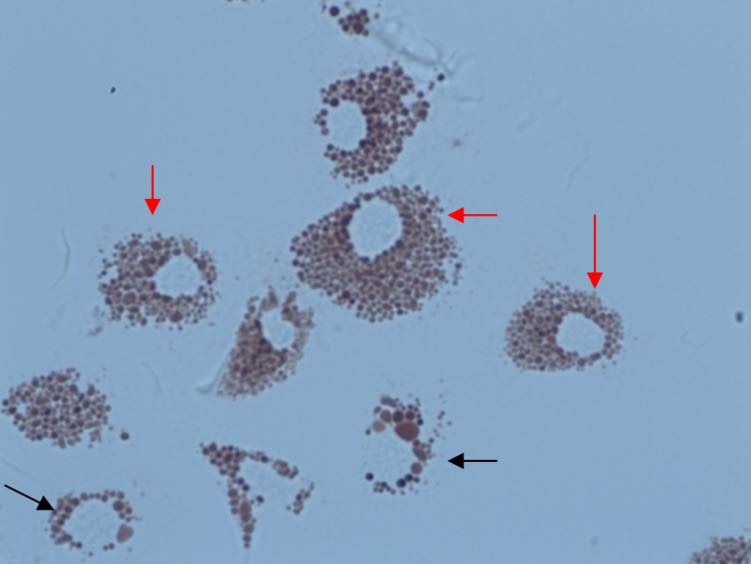 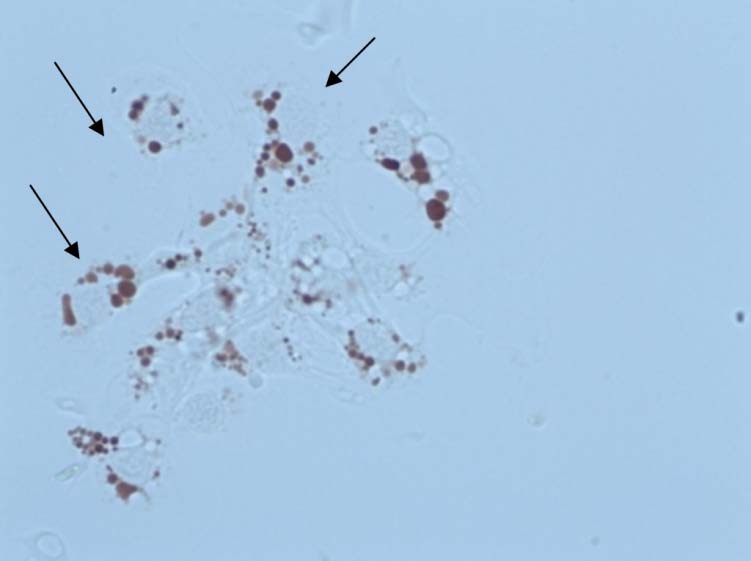 ICES/OSPAR WKLYS REPORT 2010 GRANULOCYTES IN MUSSELS RED ARROWS IN FIGURE BLACK ARROWS IN FIG-URE Number of granules Size of granules Nucleus diameter Figure 9. Main type of granulocyte cells frequently observed in haemolymph samples in Mytilus
sp. Red arrow = type 1; black arrow = type 2.
A recent laboratory study demonstrated that granulocytes in control animal typically appeared with the characteristic pseudopodial projection and that treated animal granulocytes clearly demonstrated an increase in their dimensions, cell rounding and a substantial loss of pseudopods (Calisi et al., 2008). Enlargement of granulocytes is considered an abnormality according to the ICES protocol. In fact, the endpoint stated is " …when 50% or more of the cells (…) exhibit lysosomal leakage or show abnor-malities such as enlargement (Figure 9)". WKLYS found the Figure 9 in ICES protocol (Figure 10) rather out of focus and confusing in terms of interpretation criteria (dis-playing an elongated granulocyte but with evidences of leakage of NR in the cytosol). 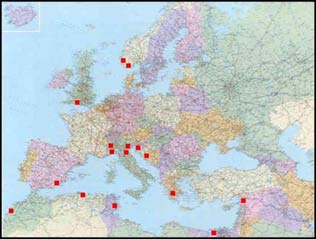 ICES/OSPAR WKLYS REPORT 2010 10 Proposals for effective and repeatable external quality assurance programmes for the measurement of lysosomal membrane sta-bility (ICES/OSPAR) Quality assurance WKLYS made a review of the NRR assay intercalibration exercises for lysosomal sta-bility carried out in the past years. The first exercises were conducted in the ICES/UNESCO-IOC-GEEP Bremerhaven Research Workshop and UNEP-MEDPOL programme, and for the neutral red retention method in the GEF Black Sea Environ-ment Programme (Köhler et al., 1992; Lowe et al., 1992; Moore et al., 1997, 1998a, b; Viarengo et al., 2000). The results from these operations indicated that both tech-niques could be used in the participating laboratories in an effective manner with insignificant inter-laboratory variability. The standards used in these intercalibration involved digestive glands from marine mussels prepared at the University of Genoa/University of Eastern Piedmont, Alessandria (Italy). Comparisons of the cyto-chemical and the neutral red retention techniques have been performed in fish liver (ICES-IOC Bremerhaven Workshop, 1990) and in mussels experimentally exposed to PAHs (Lowe et al., 1995) as well in within the framework of the BEEP project. Results from the ring test undertaken within the framework of the BEEP project (Work Pack-age 4) were somewhat disappointing and there was a poor agreement in the results between the participating laboratories. This later intercomparison exercise involved transportation of live mussel samples to the partner laboratories (Final Report BEEP Project; http://beep.lptc.u-bordeaux.fr). The first intercalibration exercise combining MED POL and ICES a laboratory was carried out in 2009, and 16 laboratories participated (Figure 12). The results are ex-pected by November 2010. Figure 12. Location of the laboratories that have participated in the NRR assay intercalibration
exercise carried out in 2009.

10.1 New proposal for NRR assay intercalibration exercise John Bignell described the use of virtual slides as a unique alternative method for undertaking intercalibration exercises incorporating microscope preparations. In es-sence, virtual slides are image scans of a microscope slide at a high magnification (generally 200–400x magnification) (Figure 13). These scans are stored as electronic 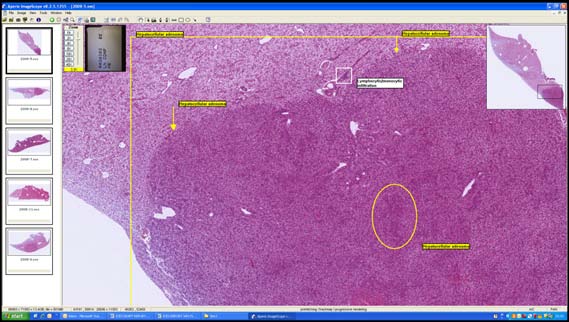 ICES/OSPAR WKLYS REPORT 2010 files which can then be opened on an individual's computer and viewed in a similar fashion to Google Earth. Furthermore, virtual slides can also be annotated. While specialist equipment is required in order to prepare the slides, no specialist equip-ment is required to view them. The BEQUALM Fish Disease Measurement pro-gramme has been utilizing virtual slides for three years and has proven to be a great success. At the end of the intercalibration, a number of small annotation files are e-mailed to participants who subsequently import them into their virtual slides. The annotation layer is then superimposed over the virtual slides describing any pathol-ogy and diagnostic criteria to the participant. Figure 13. Typical example of a virtual slide showing slide box, slide identifier, slide overview
and main browser pain with annotation layer.