MEANJIN – Arts & Humanities Journal (ISSN: 0025-6293), Vol 6 Issue 1 (2014) PP: 13-24, www.meanjin.xp3.biz
Creativity in research and development environments: A practical review
Joachim Burbiel
Fraunhofer-Institute for Technological Trend Analysis Appelsgarten 2, 53879 Euskirchen, Germany ABSTRACT
Creativity is of paramount importance to the innovation process. Therefore the findings of creativity research should be thoroughly considered in organisations where innovation processes are required. This review summarises the literature in the field of work place creativity, with special attention given to R&D environments. Current theoretical models of creativity are discussed and a literature review of the influence of (i) motivation, (ii) interaction within work groups and between group leaders and members, and (iii) organisational culture and environment on creativity is undertaken. Practical advice is derived from literature findings wherever possible. Acknowledgements: The author wishes to thank Mr. Manfred Burbiel for valuable support regarding language issues.
Keywords: creativity, innovation, research, development, motivation, organisational culture, brainstorming 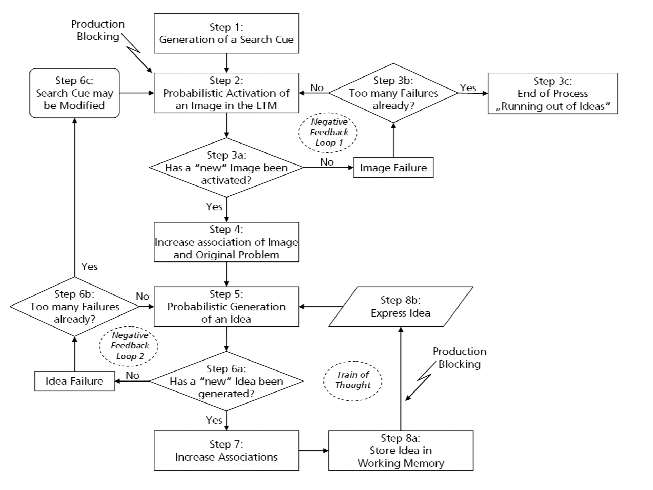 MEANJIN – Arts & Humanities Journal (ISSN: 0025-6293), Vol 6 Issue 1 (2014) PP: 13-24, www.meanjin.xp3.biz
Figure 2: The "Search for Ideas in Associative Memory" (SIAM) model (adapted from Nijstad & Stroebe (2006))
The Search for Ideas in Associative Memory (Nijstad 2006) 3. MOTIVATION
matches well with the Componential Theory of Individual Creativity (Amabile 1997): Expertise can be considered a Although most of the relevant publications emphasise that measure of how well developed (density and ontological innovation is a group process, Redmond (1993) underlines the interconnectedness) the LTM is, creative-thinking skill can be fact that "it should, however, be recognised that the individual is seen as proficiency in cue generation and activation of images, the ultimate source of any idea or novel problem solution". and motivation as tolerance to failures and thus a measure on Although this original idea will be modified, supplemented or how long the ideation process is kept active. excluded by a team, idea generation happens inside the individual. On the other hand, idea processing can only happen 2.4. SIAM and production blocking
once the idea is expressed and communicated to the outside environment. As pointed out above, the Componential Theory of Individual Creativity (Amabile 1997) insists on (intrinsic) According to Nijstad & Stroebe (2006), production blocking, a motivation as a key component of individual creativity. The link concept important in the explanation of effects observed in between motivation and creativity is well established and brainstorming (see section 4.3), may occur at two stages of the generally accepted. Yet, there are two questions related to it that process. In both cases it is caused by the limited resources of the have not been answered exhaustively. The first one has received WM. There is a high chance of a validated idea being simply some attention, and results from research on it will be discussed forgotten if mental work has to be performed between storing further on: Does it make a difference if individuals are the idea in the WM (step 8a) and expressing the idea (step 8b). motivated by themselves (intrinsic motivation), in contrast to In a group brainstorming setting, this mental work consists of being motivated by prospects of receiving rewards for being monitoring the group proceedings for a possibility to express one‟s idea. The chance of forgetting an idea rises with waiting creative from outside (extrinsic motivation)? The second question has not been raised in a scientific context, to the best of time, and thus with group size, making large brainstorming our knowledge: Does motivation really influence the production groups less effective. Apart from that, this mental work might or just the expression of new ideas? In other words, do poorly also interfere with the demanding process of activating a new motivated individuals have new ideas at the same rate as highly image in the LTM (step 2). The false impression that group motivated ones, and do they just not tell anybody? brainstorming is more effective than individual brainstorming might be caused by these interruptions (at least in part, as other processes like social comparison play a part, too): In individual 3.1. Intrinsic vs. extrinsic motivation
brainstorming, both more images are activated, and activated images are used more thoroughly, as fewer interruptions occur. That leads to a higher number of "failures", which again are Arthur Schawlow, winner of the noble prize in physics 1981, was once asked what, in his opinion, made the difference experienced as negative, and lead to the (erroneous) feeling of between highly creative and less creative scientists. He replied: "The labor of love aspect is important. The most successful scientists often are not the most talented. But they are the ones

MEANJIN – Arts & Humanities Journal (ISSN: 0025-6293), Vol 6 Issue 1 (2014) PP: 13-24, www.meanjin.xp3.biz
Figure 5: Organisational cultures (adapted from Cameron & Quinn (1999))
According to Claver et al. (1998), the ideal profile for creativity might lead to. The dilemma that novel, high potential methods is Adhocracy: Openness for new technologies (and change in perform worse than long established concepts and procedures general) and the readiness to take risks, both factors these has been addressed by Young (2007). It seems to be a general authors identify as creativity-promoting, are part of the ideals rule that in the beginning new methods have poorer performance and values immanent to the Adhocracy culture. The flexibility to than well-established procedures. On the other hand, they have react rapidly to new developments, to incorporate new the potential to result in higher performance, if enough effort technology, and to address new problems and ideas as they arise, and time are invested (figure 6). This is inherently associated has also been found to be typical of highly creative research with considerable risk, as it is not clear what the potential groups (Heinze 2007). It is therefore advisable to create an performance of the novel method is: The chances that it will Adhocracy type environment if high creativity is desired, while never exceed the established, by-the-book procedure are alternative corporate cultures might be more valuable in other considerable. In that case all the invested means and efforts were parts of a larger organisation. Typical features of a Hierarchy are futile. Practically, this risk can lead to the effect that "negative well-established procedures and adherence to strict rules. They stereotypes and immediate work demands can lead to a are clearly detrimental to the establishment of an Adhocracy and premature rejection of potentially valuable new ideas," if no should thus be avoided in an R&D setting. A willingness to take sufficient emphasis is put on the introduction of novel ideas as a risks has already been mentioned as conducive to creativity management principle (Mumford 2000). Again, it seems to be several times. It thus seems fitting to consider the risks posed by essential to define "success" in a way that allows creative failure a creative approach to problem solving. The main risk in taking to be considered a necessary step on the way to improved a new path lies in abandoning a well-trodden one. This has to be done at a point in time when it is not clear where the new path Figure 6: A risk associated with creativity lies in the unknown potential of method B (adapted from Young (2007))

© SYMPHONYA Emerging Issues in Management, n. 2, 2014 symphonya.unimib.it Preventing Corruption in Africa: Emerging Challenges in the Mining Sector of the Democratic Republic of Congo* Cosetta Pepe**, Jean Marie Mushagalusa Nshombo***, Mario Risso**** The globalisation of economies and markets, brings out the full importance of the