Council on Aspirin Health and Prevention National Commission on Prevention Priorities: In 2007, the Partnership for Prevention-convened National Commission on Prevention Priorities published a new study ranking those community preventive services that provide the greatest impact and are the most cost-effective. The research concluded that utilization rates remain low for many preventive services that are very cost-effective and save lives. The Commission determined that counseling about regular aspirin use was one of the top-ranked clinical preventive services based on value and impact. NCQA/HEDIS measure: 2008 Partnership for Prevention and the Aspirin Task Force worked with the National Committee for Quality Assurance to develop an aspirin quality measure for health plans. Task Force members Dr. Michael Pignone, Dr. Randall Stafford, and Kathy Berra served as the aspirin experts. The process began in 2008 and the measure was added to the Healthcare Effectiveness Data and Information Set (HEDIS) in 2010. Through a consumer survey, the aspirin quality measure assesses the fraction of men aged 46-79 and women aged 56-79 enrolled in commercial plans who have discussed the benefits and harms of aspirin with their health care provider. Today, CAHP members continue to be involved in NCQA CVD prevention guideline Medicare National Coverage Determination: 2010 In 2010, Partnership for Prevention and the Council on Aspirin for Health and Prevention submitted a National Coverage Determination request to the Centers for Medicare & Medicaid Services (CMS). It asked that health care providers be reimbursed for talking to patients about taking aspirin to prevent heart attack and stroke. CMS reviewed the request and the evidence behind aspirin counseling and agreed, creating an "intensive behavioral counseling for cardiovascular disease" benefit to reimburse providers. Partnership for Prevention received the Health Policy Award from the National Forum for Heart Disease and Stroke Prevention for this work. Online Aspirin Advice Tool: 2008 Randy Stafford, MD Dr. Stafford developed an online tool that advises consumers about whether aspirin is right for them and facilitates patient-provider discussions about aspirin. It was pilot tested among Stanford University employees. Data collected through the online tool showed that of patients without past stroke or heart attack who were most likely to benefit from aspirin, only 56% were taking aspirin. Of those with little to gain from aspirin, 11% were nonetheless taking aspirin. The tool advised users to speak with their health care providers, particularly when the recommendation for use was different from their current practices. Aspirin for Primary Cardioprevention: 2009 Dr. Miser conducted a detailed clinical survey of aspirin use in five family medicine practices in the Ohio State University Primary Care Network. A total of 1,615 subjects, age 40 to 79 years, were asked about their cardiac risk factors, patterns of aspirin use, and interactions with health providers about aspirin. The most common reasons for not taking daily aspirin were that no one recommended it (32%), already taking too many medications (13%), concern about interactions (9%), bleeding problems (8%), and aspirin allergy (5%). The survey showed that discussions between patients and clinicians were key to decisions to start taking aspirin. Aspirin Cost Effectiveness: 2010 Michael Pignone, MD Dr. Pignone published an article on how cancer mortality affects the cost- effectiveness of using aspirin to prevent first heart attacks in men. Modeling a hypothetical population of middle aged men without diabetes or heart disease who were given aspirin therapy, he estimated their decreased risk of cardiovascular disease and cancer compared with the increased risk of gastrointestinal bleeding and stroke. Accounting for both cardiovascular and cancer prevention benefits, aspirin was cost-effective for middle aged men with a 10-year chance of developing cardiovascular disease as low as 2.5%. This expanded the population in which aspirin benefits exceeded harms. This analysis suggests that aspirin recommendation should not be based solely on cardiovascular disease, but rather should incorporate cancer prevention. A Survey of Aspirin Use in the USA: 2012 Craig Williams, PharmD The Council on Aspirin for Health and Prevention conducted a national survey of U.S. adults on aspirin use to update a previous survey conducted in 2006. 2,509 adults aged 45-79 were asked about their current aspirin use, their knowledge of aspirin's benefits and harms, and whether they discussed taking aspirin with a health care provider. Of those without a history of cardiovascular disease, 47% reported using aspirin. Aspirin use was more common if risk factors for heart attacks and stroke were present. In addition, those surveyed were more likely to use aspirin if they were more knowledgeable about aspirin's benefits and harms and if they had discussed aspirin use with their health care providers. 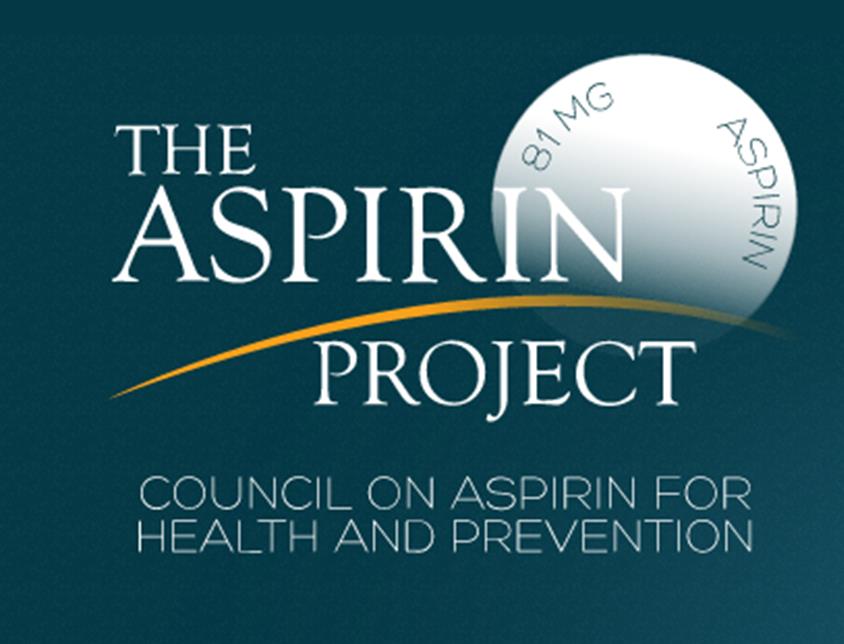 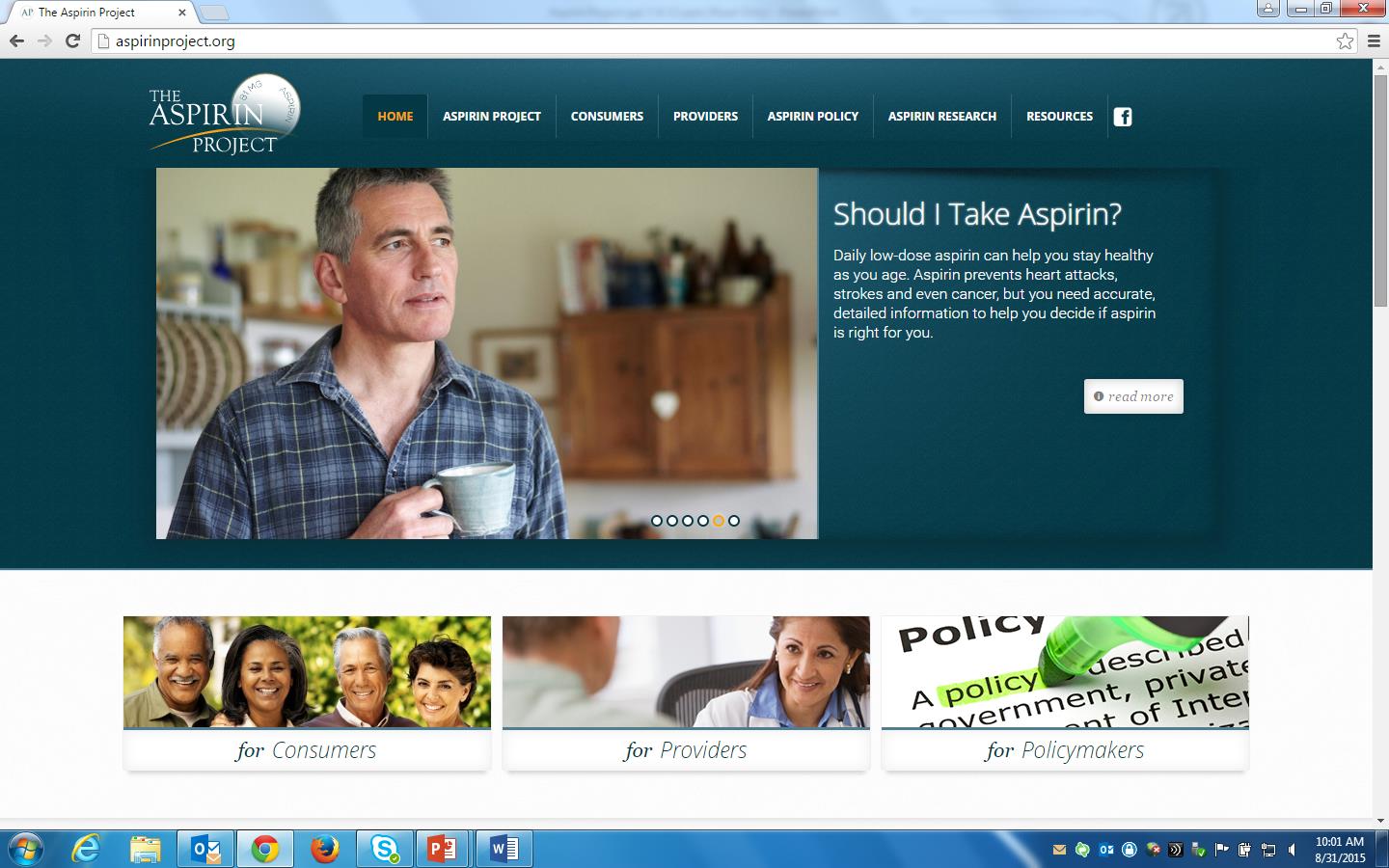 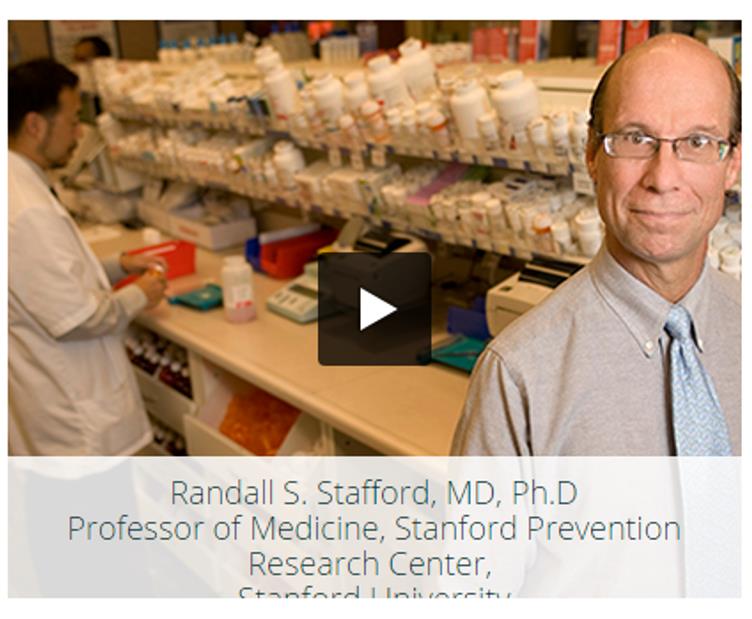 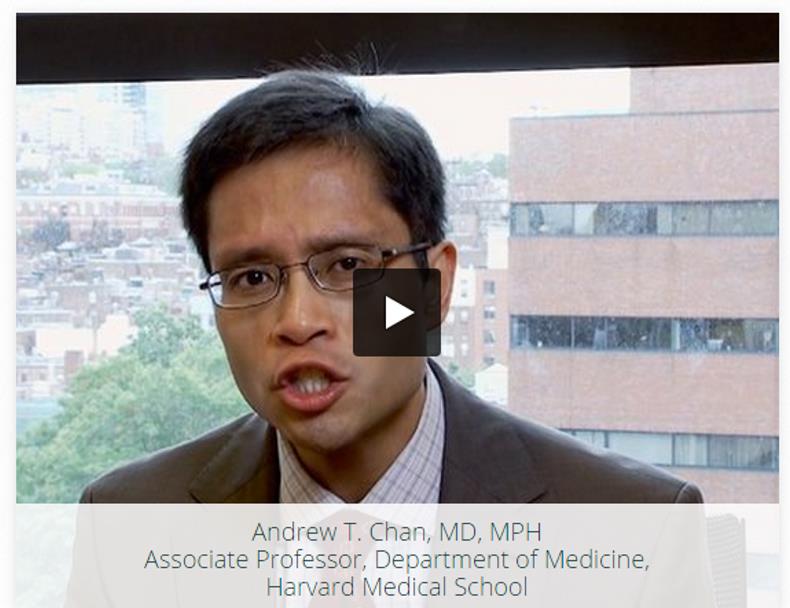 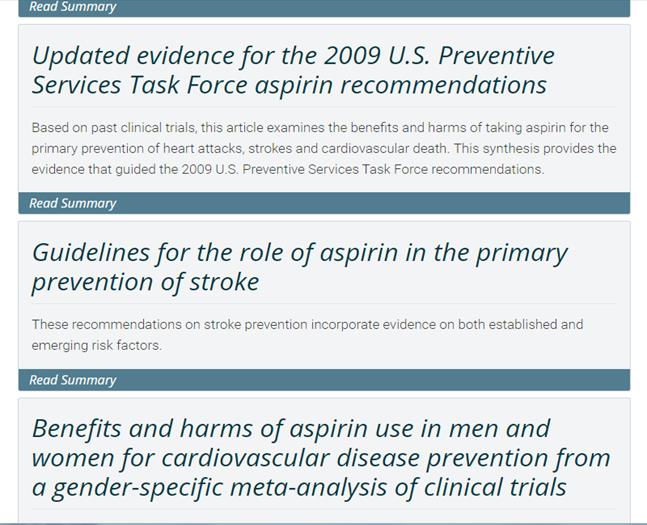 Key Evidence Summaries: 2013 The Aspirin Project maintains a repository of key evidence related to aspirin and prevention. The key evidence articles feature most of the critical research studies in recent years that inform national aspirin use guidelines and recommendations. Fact Sheets: 2013 ◦ Council on Aspirin for Health and ◦ Aspirin's Revolution: Folk Remedy to ◦ Men and Women: Protecting Our ◦ Experts Say Aspirin is Lifesaving ◦ Aspirin and Primary Prevention: Benefits and Harms ◦ Should I Prescribe Aspirin for Primary Prevention in My Patients? Aspirin in the News: 2013 Each month, the Aspirin Project publishes a two-page digest called Aspirin in the News, highlighting recent consumer-friendly and scientific articles of significance. 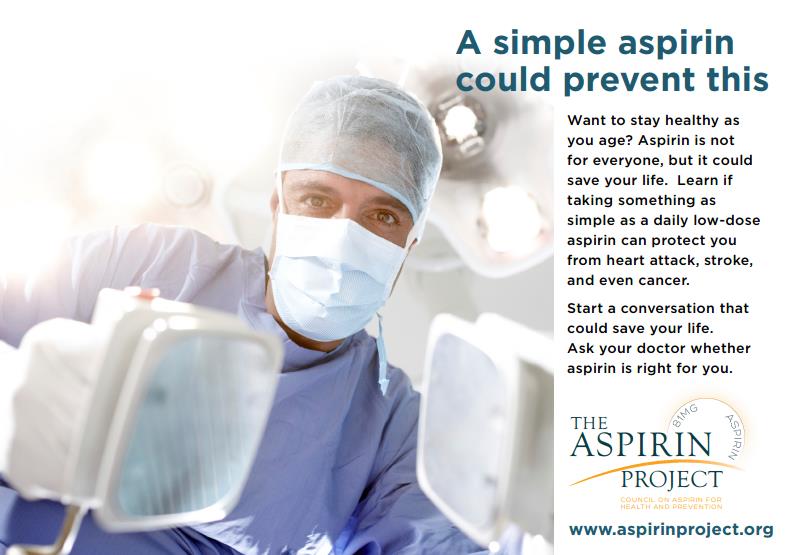 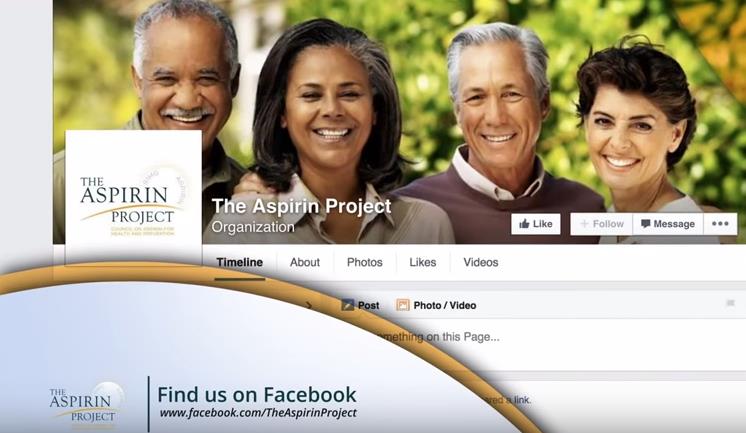 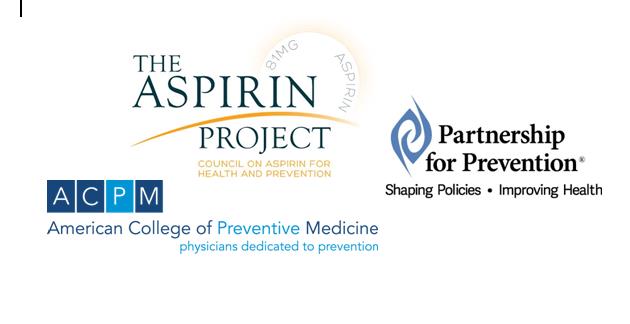 Educational Program: 2014 Aspirin & Disease Prevention: A Clinical Perspective Aspirin Project Promo Video: 2014 Aspirin Grants to External Organizations: 2015 The Council on Aspirin will award grants up to $10,000 for the implementation of projects to increase the appropriate use of low-dose aspirin. Funds may be requested for educational, communications, implementation science, and/or partnership- building activities that relate to aspirin and disease prevention. New Council on Aspirin Research Project: 2015 The Council on Aspirin awarded a grant to Russell Luepker, MD, University of Minnesota School of Public Health. The project, titled "Testing a Community Intervention to Increase Aspirin Use for Primary Prevention of Cardiovascular Disease," will develop strategies to improve the appropriate aspirin use in an underserved Hispanic/Latino community utilizing a Community Based Participatory Research approach. "Ask about Aspirin" Program Ask About Aspirin Ask About Aspirin's goal is to support the State of Minnesota Heart Disease and Stroke Prevention Plan by lowering the number of first heart attacks and strokes with the usage of low-dose aspirin. The initiative was designed by the Lillehei Heart Institute at the University of Minnesota Medical School, in partnership with the School of Public Health, and is an official partner of the U.S. Department of Health and Human Services Million Hearts ® initiative. In 2015, less than one in three at-risk Minnesota adults use daily low-dose aspirin to lower their risk of a first heart attack or stroke. Appropriate primary prevention aspirin use has the potential to prevent more than 10,000 first time heart attacks and strokes in Minnesota. Ask About Aspirin Banner Ask About Aspirin Goals Conduct research to explore general public knowledge, attitudes, and behavior related to aspirin. Launch a healthy living campaign to promote best practices in Safely lower rates of first heart attacks and strokes. Facilitate effective population health across Minnesota.   Ask About Aspirin's desired action on the part of the public is for men and women in the targeted age groups to consult their health professional to ask if they should take aspirin. The action desired on the part of health professionals is for them to evaluate their patients about the use of aspirin for cardiovascular disease prevention and recommend it to those for whom it is appropriate. The program is both a public health campaign, devoted to increasing aspirin use in the target population, and a clinical investigation, to determine the relative efficacy of each key intervention - public media campaign, social media messaging, and health system intervention. Ask About Aspirin Posters Focus Group and Survey Findings 6% had already had either a heart attack or stroke. 55% had already been taking aspirin. 78% believed taking aspirin has advantages; only 3 percent said it has disadvantages. 95% said their doctor could convince them to take aspirin. Of those taking aspirin for prevention, 79% take low-dose aspirin. Hibbing, Minnesota Pilot Hibbing, Minnesota, was selected for the community-based intervention, a city of approximately 16,000 persons. At baseline, 36% of the primary prevention candidates reported regularly using aspirin, which is comparable to the national average. After a continuing medical education campaign for health care providers and a mass media campaign to reach consumers, the following positive results At 4 months, the percentage in the intervention population who reported regularly using aspirin had increased to 54%. This was sustained at 52% at the 16 month mark. Additionally, at 4 months, 46% of primary prevention candidates, and at 16 months 63% of candidates, indicated they had seen or heard the program messages in their community or workplace. Now, as the Ask About Aspirin team attempts to take the initiative statewide in Minnesota, several aspirin-related practice tools are being made available free of charge. These include a short "state of the art" web-based CME accredited learning module, a patient brochure, an electronic health record tool, and a clinician information sheet. Aspirin rates for the primary prevention of cardiovascular disease in Minnesota remain low, but a combined public health and primary care approach, through the delivery of a community-based intervention, may offer an effective and relatively rapid means to increase and sustain aspirin use rates for primary prevention.

ACUPUNCTURE AND TENNIS ELBOW About tennis elbow Tennis elbow (lateral epicondylitis) is characterised by pain and tenderness over the lateral epicondyle of the humerus. In the UK, the annual incidence of lateral elbow pain in general practice is around 4/1000 to 7/1000 people.(Hamilton 1986) It is most common in people aged between 40 and 50 years (Allander 1974); for example, the incidence is as much as 10% in women aged 42 to 46 years.(Chard 1989; Verhaar 1994)