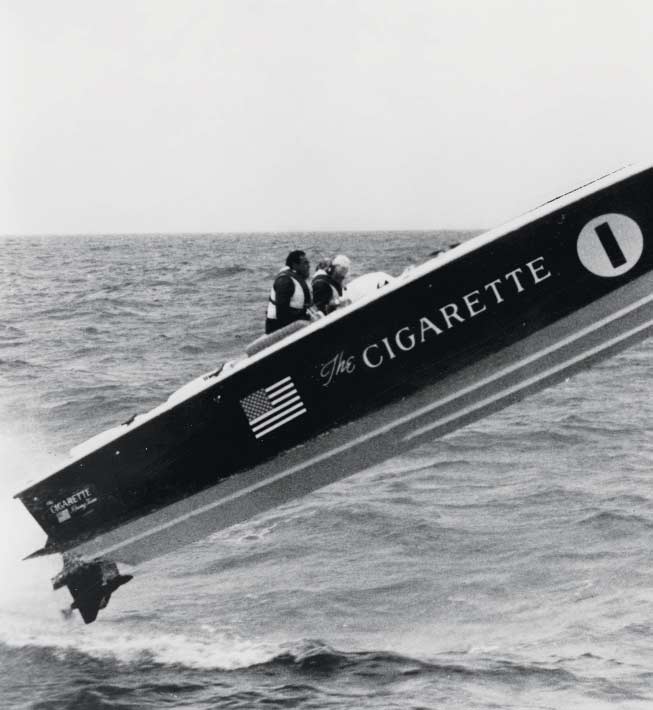 ANCE & ROM
Subtitle: The infamous ‘Thunderboat Row' of Miami's NE 188th Street no longer exists, its valuable real estate now occupied by high-rise waterfront condos, but the legacy of a brand that turned this narrow peninsular into the epicenter of performance offshore boating endures. Under the paternal stewardship of Skip Braver, the Cigarette Racing Team brand maintains its quintessential allure, while now building Cigarettes of unsurpassed quality. From bullets to billet, embezzlement to embroidery, murder to merchandising, this is the story of the development of one of the USA's leading brands.
Images: Courtesy of Cigarette Racing 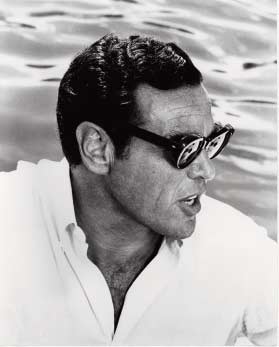 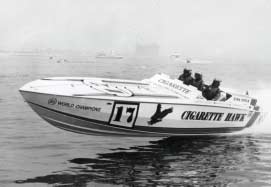 The Christensen Shipyards facility in
Vancouver, Washington State, were
purpose built by Dave Christensen
and inaugurated in 1983.


Cigarette is known as the icon of powerboating – one of few world-
famous quintessential brands whose name embodies an industry, like
Xerox, Kleenex and Coke. The book, Quintessence: The Quality of
Having ‘It' had a place on the desk of former Cigarette Racing Team's
president Bob Gowens. It includes pictures and descriptions of iconic
brands, including Don Aronow's 38' Cigarette Hawk race boat. Per-
haps that title communicates the magic that has kept the brand at
the top of the performance boat food chain for over four decades. Sev-
eral custodians may have steered different courses for the Cigarette
Racing Team since the 1940's, but why has the name has remained
synonymous with fast offshore powerboats since the 1970's? We
dusted off the record books, bought beers for ex-racers, spoke to past
presidents and visited the splendid modern facility on the outskirts
of Miami, FL to discover the making of a legend.
POWERBOATING TAKES A HIT
A shooting was not unusual in North Miami in 1987, a time in South
Florida's raucous history when drugs and criminals ran freely and
9mm shells on roadsides were as common as sea shells on beaches.
On 3rd February 1987 however, on Thunderboat Row – the notorious
188th Street where legends like Formula, Donzi, Magnum, Cigarette
and US Racing Team were born – Don Aronow, the legendary creator
of these leading powerboat companies, sat in a pool of blood, shot in
his Mercedes in front of his office. Though Aronow died suddenly
and unexpectedly, the Cigarette brand lived on, built around the man
who personified power. While most refer to any "go-fast" boat as a
"Cigarette," connoisseurs know it as THE brand, one that possesses
its own mystique. But how does a boat brand achieve and maintain
international dominance? In simplest terms: by being a step ahead
and a world apart.
QUINTESSENCE: NOUN. 1.
THE FIFTH ESSENCE OR ULTIMATE SUBSTANCE OF
WHICH HEAVENLY BODIES WERE THOUGHT TO BE
COMPOSED. 2. THE PURE CONCENTRATED ESSENCE
OF ANYTHING; 3. THE MOST PERFECT MANIFESTATION
OR EMBODIMENT OF A QUALITY OR THING.
WEBSTER'S NEW WORLD DICTIONARY. 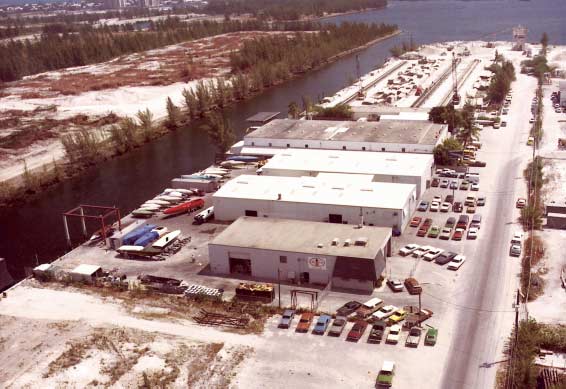 Despite years of rotating door-ownership, mismanagement and al- eled his quest for the perfect boat and engine that would win. He em- leged embezzling, the Cigarette name has not just survived, but barked on a new 25-year career in powerboat racing, proving his skill thrived. Rising above any other in the genre and maintaining its and expertise on the water by winning over 350 international races, value, gravitas and machismo. An aspirational brand – one that 11 world championships, 25 US championships and numerous speed makes testosterone soar – the company's story is as enigmatic as its records. He also proved himself as the man who defined the brand – product, customers, founder and those who have propelled the brand top-quality, sexy and loaded with brash performance – still Cigarette's forward, leaving other boat companies in its wake. namesake qualities. And while Aronow's other boat brands have sur-vived ups and downs in the economy and enjoyed success, Cigarette A LITTLE HISTORY…
remains the pinnacle and his most fitting legacy. For Cigarette is Known for his athletic ability, rugged, handsome looks, and hard-dri- more than a boat, it's a legend that's aura started with Aronow and ving strength, founder Don Aronow was both a man's man… and a outlived him.
ladies' man. His handshake deals and sexual prowess were the pillarsof his reputation. He was always making deals, either closing a sale or closing in on the wife of a customer, secretary or other willing fe- In the early 60's, Aronow used racing as the proving ground for each male. A construction magnate from New Jersey who retired early to of the boat brands he built and won races with: Formula, Donzi and South Florida, Aronow grew restless. While enjoying sport fishing, Magnum. As each company established its reputation, he then sold he connected with boaters who shared tales of the 184-mile Miami- its and cunningly maneuvered his way out of non-compete clauses, Nassau powerboat race. In the five years since its inception, the while all the time constantly working to create the ultimate perform- Miami-Nassau had become the Mecca for international thrill seekers, ance boat. The first Cigarette race boat, named after a rum smuggler's and the Muse for Aronow's competitive nature. boat that Aronow admired as the renegade owner continually out-ran He connected with the best in the business, built a 28' semi-V-bottom the law, came far before Cigarette Racing Team was formed. He even boat with specially-designed racing engines and, though a faulty built the first ‘Cigarette' under Cary Marine's name, in order to evade clutch caused him to lose his first race, the adrenaline addiction fu- the non-compete caveats from his sale of Magnum. So while "The Around the production halls color-coded schedules are mounted near the yachts in build:
green indicates on time, yellow means deadlines are at risk and red means the department is delayed. 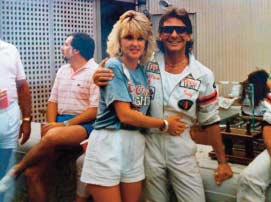 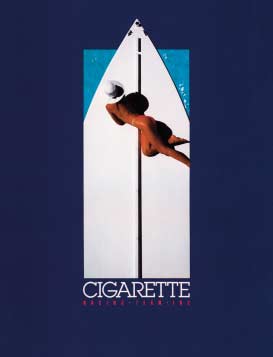 IN 2009 CHRISTENSEN
IMPLEMENTED THE LEAN
OF KAIZEN, PRACTICING
THE ELIMINATION OF
WASTE AND FOLLOWING A
PATH OF CONTINUOUS
Monaco, business moguls like Bernie Little, Rocky Aoki, RogerPenske and then-US Ambassador to China, President George Bush,Sr., that elevated the brand and business. Aronow didn't just sellboats; he built relationships. Customers were equally as fascinatedwith him as with his high-performance boats. With model names like"Awesome" and "Mistress"—described by Aronow to "Perform like amistress should," Cigarette's aura grew and attracted those whocraved a wild and daring image. Aronow was reportedly asked "Whatmakes a boat sexy?" and he responded, "A line that never grows old.
The 540-K Mercedes has it. The Ferrari has it. When you look atwomen, some just look sexy. They have universal appeal, like Eliza-beth Taylor." As the line and its reputation grew throughout the US, Cigarettereached abroad. St. Tropez businessman, Marcel Biales, met Aronowand the immediate bond formed wrote Sportmer Marina's name inthe Cigarette history books. Sportmer remains the longest-standingand most successful offshore dealer to date. A Riva dealer with 50slips in the Euro-chic town's center harbor, Biales recognized a nichefor Cigarette amongst the wealthy, image-conscious European boater.
His valuable dock space made the perfect deal-closer and became ashowcase for rows of Cigarettes on the French Riviera. Europeans andracers from around the world added to the allure, buying Cigarettesof all sizes, winning races and hearts. Noted racing personalities likeVincenzo Balestrieri and Carlo Bonomi competed against AmericansBob Magoon, Billy Martin, Bob Nordskog and scores of others includ-ing Betty Cook, the first woman to win the prestigious British Cowes-Torquay-Cowes race in her 36' Cigarette. Dealers were added, speed and racing titles sold more boats and theSouth and Central American market began to grow as races were heldin Panama, Argentina and Uruguay. Though drugs were not known Cigarette" carried Aronow to eight international victories and speed to be smuggled in Cigarettes as is commonly believed – the boats records, the fact that Cigarette Racing Team did not yet exist is irrel- were too valuable to be shot-up in a chase or left behind in a deal- evant. The name of the manufacturing company still baffles people gone-wrong – they were coveted and became the trophies for those unfamiliar with boating, it is not a ‘Racing Team' and has not raced who made hoards of money from the trade. It was still the glamour of corporately in years, but Aronow thrived on racing. He surrounded offshore racing that drew a new breed of sportsman. According to himself with the best and most loyal throttle jockeys, including his Aronow's son, Michael, in his book, The King of Thunderboat Row, riding mechanic, "Knocky" House and Carl Kiekhaefer whose en- friend Billy Wishnick proclaimed; "I was a married, out-of-shape, mid- gines helped cement the success of Cigarettes and competitors from dle aged businessman. Then, I attended a New York boat show where around the world who bought Cigarettes to win races.
I met Don Aronow. Now, I'm divorced, an ocean racer and a swinger." Though racers built the allure of Cigarette, it was the attention of Wishnick was just one of the many infamous Thunderboat Row race Kings, Shahs, Sheikhs, celebrities, royalty like Princess Grace of boat jockeys.