National Surveillance of Antimicrobial
Resistance
Report to Ministry of Health Sri Lanka College of Microbiologists SLCM ARSP & NLBSA Technical Committees
December 2014
National Surveillance of Antimicrobial Resistance: SLCM Report to MOH National Surveillance of Antimicrobial Resistance:
Report to Ministry of Health by SLCM
Background
Currently, national surveillance on antimicrobial resistance is carried out as two projects by the Sri Lanka College of Microbiologists. The Antibiotic Resistance Surveillance Project (ARSP) which produces data from blood culture isolates was started by the SLCM in a few selected hospitals in 2009 and was expanded to all hospitals with consultant microbiologists by 2013. The parallel project National Laboratory Based Surveillance of Antimicrobial Resistance of significant urine culture isolates (NLBSA) was started following a meeting held in 2011 in the Ministry of Health, with participation of the Director General of Health Services, the DDG/LS, Director (LS), Director (MT&S) and many microbiologists from the hospitals and universities of Sri Lanka. Together, these two projects enable us to gain a broader understanding of the extent of antimicrobial resistance in Sri Lanka. Implementation plan
Both projects were initiated under the guidance of Steering Committees and a Technical
Committee. The Technical Committee designed the way forward in implementing the activity.
Decisions were taken on
1) Scope of the activity 2) Data collection & distribution system 3) Needs assessment on fulfilling and sustaining the activity Scope of the activity and data collection In 2009, at the initiation of ARSP, collecting data which is comparable and is of international standard was difficult due to the non-availability of culture identification systems and the uniformity of antibiotic resistance testing. To overcome these difficulties, the scope of the activities included introducing identification of blood culture isolates to the species level, supplying the essential antibiotic discs, streamlining the supply chain of the Ministry of Health to provide the necessary items to sustain the project and introducing CLSI antibiotic sensitivity testing method in all participant laboratories. National Surveillance of Antimicrobial Resistance: SLCM Report to MOH In the first phase of the project, data on all Gram-negative culture isolates were entered into a tailor made software. A few workshops were conducted by SLCM to train the microbiologists, medical officers (where available) and the technical staff of microbiology laboratories to carry out the project. Data dissemination was planned through scientific presentations and publications. As the initial step in surveillance of antimicrobial resistance in organisms causing UTI, the data on isolates of midstream urine specimens with a colony count of ≥ 105 CFU/ml, was to be entered into WHONET microbiology software in all hospitals with consultant microbiologists and in microbiology departments of medical faculties with diagnostic laboratories. A few workshops were planned and conducted by SLCM to train the microbiologists, medical officers (where available) and technical staff of microbiology laboratories, in order to familiarize them with using WHONET. It was planned to distribute the generated data through the website of SLCM and by oral/poster presentations in the scientific sessions. Needs assessment A needs assessment was carried out by the SLCM among the expected participant institutes, in order to find out the facilities available and the difficulties that may be encountered. This revealed that many stations had difficulty in entering data due to shortage of manpower and the non-availability of computers. This issue was discussed with the DDG/LS of the Ministry of Health and a request was made for data entry operators for the laboratories. Although the Ministry of Health does not have cadre provision for data entry operators, a decision was taken to seek support from the heads of institutions to obtain computers and to strengthen human resources in the microbiology laboratories of all hospitals together with Consultant Microbiologists. The DGHS facilitated this by allocating a time slot to the SLCM to discuss this at the regular MoH Directors' meeting. Progress to date
Following analysis of the needs assessment, the Technical Committee understood the constraints in carrying out the proposed activity but decided to move forward nevertheless because of its importance. While continuing the efforts to strengthen facilities in all microbiology laboratories, it was decided to initiate activities in those institutions where the minimum required facilities were already available. National Surveillance of Antimicrobial Resistance: SLCM Report to MOH The data of the first phase was analyzed and published in the Ceylon Medical Journal in 2013, (See Annex 2 for copy of paper). This data has been used by the WHO in preparation of the AMR report of South East Asia. The 1st phase was followed by the 2nd phase, which started in 2013 with all blood culture isolates. The available data of year 2013 is under analysis now. For surveillance of AMR on UTI, only the Microbiology laboratories at the Lady Ridgeway Hospital, Colombo North Teaching Hospital, Ragama, Sri Jayawardenapura General Hospital, Nugegoda, BH Angoda (IDH), Peradeniya Teaching Hospital, Faculty of Medicine, Colombo Faculty of Medicine, Ragama and GH Ratnapura were able to commence data entry. In mid-2014, the SLCM decided to analyze the available data for 2013, and disseminate the results by presentation at the Annual Scientific Sessions of the Sri Lanka College of Microbiologists in September 2014 (See Annex 1 for copy of abstract). The data was analyzed only in totality and is not age-group specific or disease-entity specific. The susceptibility rates were calculated using the antibiogram reported to clinicians by the laboratories. Summary findings 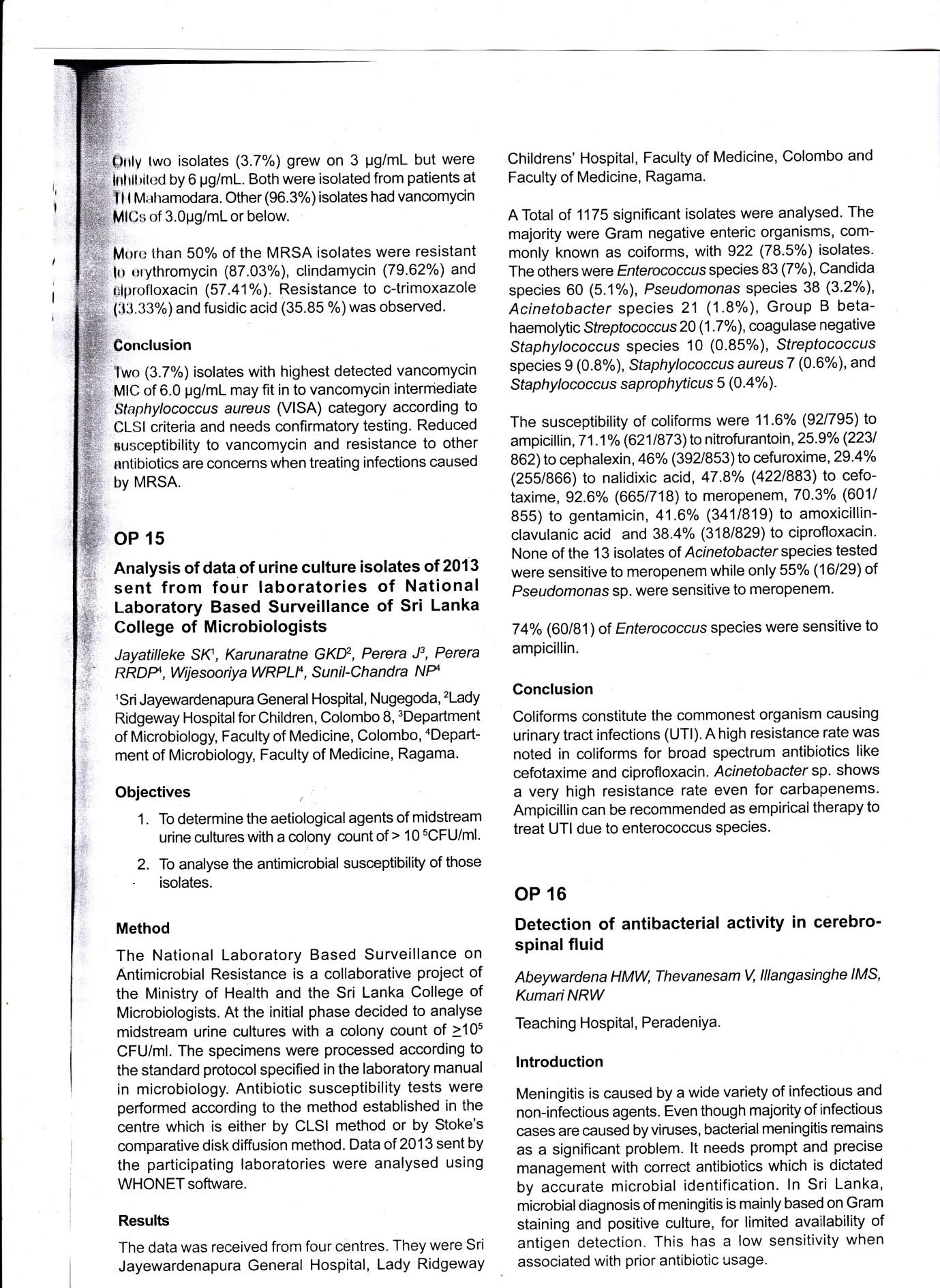