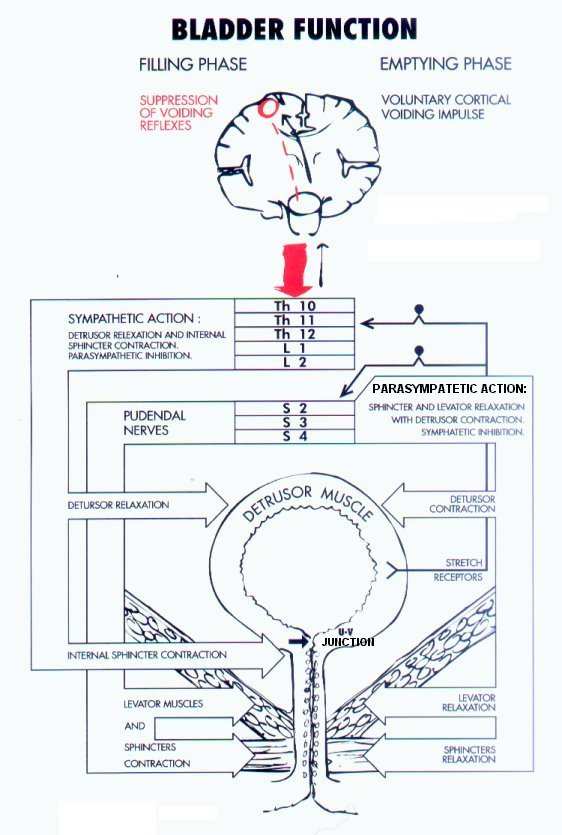 GENUINE STRESS INCONTINENCE PROTOCOL. GENUINE STRESS
URGE INCONTINENCE PROTOCOL
Using the NeuroTrac ETSTM in combination of electrostimulation and EMG Biofeedback in the treatment of female urinary incontinence. Anna Pawlaczyk
Specialist in Gynecology Background InformationElectrical stimulation has been shown clinically to be effective in the treatment of patients with genuine stress incontinence and detrusor instability. (see figure 3) In 1963 Caldwell implanted electrodes in the pelvic floor of women with urinary and fecal incontinence. Later other modes of delivery were developed, including stimulation. Several studies of various intravaginal stimulation protocols were undertaken by Plevnik 1986, Eriksen and Eik-Nes 1989, Fall and Lindstrom 1991, Bent 1993, Caputo 1993, Smith JJ 1996 and Fowler 2000. The studies have shown subjective success rates in excess of 80%. The majority of patients with incontinence are parous women and the elderly.

GENUINE STRESS INCONTINENCE PROTOCOL. (Figure 2) - Urinary Incontinence Urinary incontinence – the involuntary loss of urine – affects an estimated 25 million Americans and over 3 million women in the UK. The majority of patients with incontinence are parous women and older persons. The continence mechanism in women centers on the proximal urethra and urethrovesical junction. Continence is maintained by multiple structural and physiologic mechanisms that regulate closure of the urethra and support of the bladder and urehrovesical junction. Actual closure of the urethra is produced by three different systems: the involuntary internal sphincter at the vesical neck, the voluntary external sphincter muscles of the urethra and mucosal coaptation produced by the urethral submucosal vascular plexus. Anatomic support for these structures primarily comes from a fascial layer, wich is attached to the levator ani muscles of the pelvic floor. The terms "pelvic floor" or "pelvic diaphragm" refer to all the muscular components that close the pelvic cavity and their respective parietal fascial coverings. Unlike striated muscles in other areas of the body, the muscles of the pelvic floor are in a constant state of contraction, wich allows for the efficient However, even activities that cause small increases in intraabdominal positioning of the pressure such as walking or changing position, may produce similar urethrovesical junction. The symptoms. bladder and urethra are primarily innervated by the autonomic nervous system. 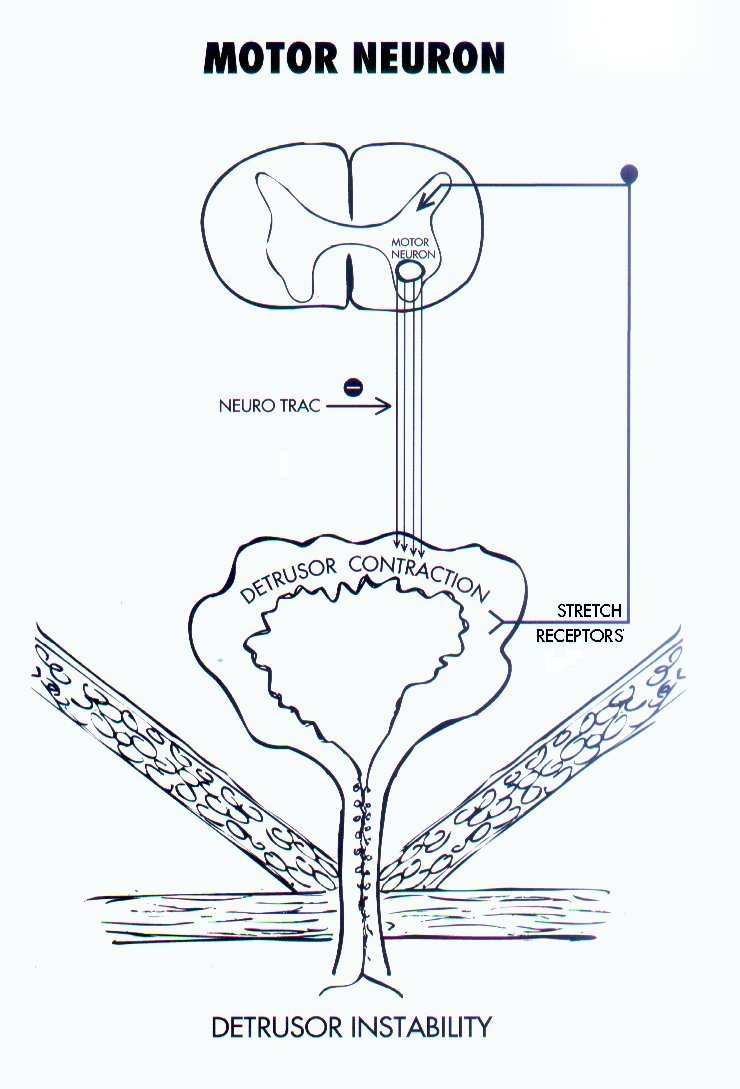 GENUINE STRESS INCONTINENCE PROTOCOL. This system can be modulated by somatic nerves that innervate the pelvic floor and external urethral
sphincter. The activation of the pudendal nerve reflexes and the direct contraction of the pelvic floor and
periurethral striated muscles due to electrostimulation to the pelvic floor is a simple, safe and effective
way to improve incontinence.
- symptoms
Although the symptoms of incontinence are many varied, they can be classified under two broad
categories: stress urinary incontinence (see figure 3 ) and urge incontinence. Patients may have more than
one kind of symptom at the same time.
Figure 3
Stress urinary incontinence involves leakage of urine with an elevation in intraabdominal pressure. It is commonly produced by coughing, laughing and sneezing. However even activities that cause small increases in intraabdominal pressure such as walking or changing position, may produce similar symptoms. (see figure 4, page 4) Urge incontinence is the involuntary loss of urine associated with a strong desire to void, whether or not the bladder is full. Many women with urge incontinence complain of not being able to reach the bathroom in the time, or they may experience urinary dribbling or leaking when they see the washroom or toilet or put the key in the door upon returning home. Urge incontinence is associated with a spectrum of voiding symptoms: frequency (>7 times/day), urgency (the strong desire to void) and nocturia (>1time/night). Usually, involuntary detrusor contractions (detrusor instability) produce the symptom complex of urge incontinence. There are many The receptor signals overwhelm the inhibitory reflex before the causes of the problem which bladder is full. essentially is an imbalance 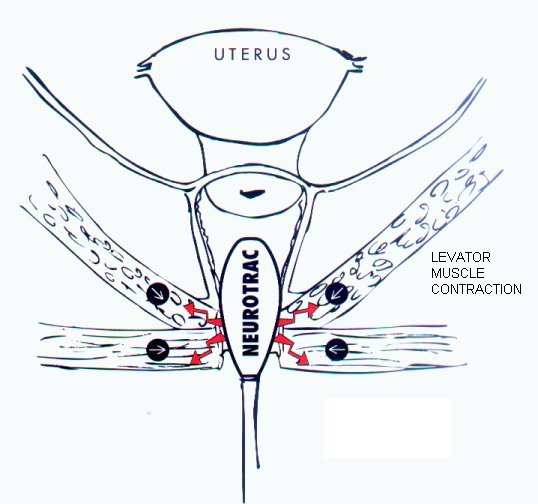 GENUINE STRESS INCONTINENCE PROTOCOL. Electrostimulation using the NeuroTrac
between the signals from the parasympathetic nerve receptors in the bladder and the inhibitory sympathetic reflex to the detrusor muscle. The receptor signals overhelm the inhibitory reflex before the bladder is full. Stress and urge incontinence are not diagnoses but rather symptom complexes that the patient healthcare practitioner. A diagnosis incontinence and is made by demonstrating evidence of urine loss, usually testing (urodynamics). Distinguishing between symptoms and diagnoses is vital because therapy – Treatment results for genuine stress incontinence take about 12 weeks; particularly surgical detrusor instability may improve in less time. treatment – is based on an
accurate diagnosis of the cause of incontinence. Urodynamics is required to be certain of the specific
diagnosis of most forms of incontinence.
Diagnosis of incontinence; Kauppila & Kujansuu diagnostic questions
Questionaire
Distinguishing stress and urge incontinence from the answers to 10 question developed by Kauppila &
Kujansuu is simple guide for diagnosing the type of incontinence. The questionnaire is as follows. All
that needed is to give the indicated points to each question and total them. A score below 7 shows stress
incontinence. Above 7 indicates treatment in the URGE electrostimulation mode – Programme 2.
GENUINE STRESS INCONTINENCE PROTOCOL. Question Points
Do you feel urgency before leaking?
No(0), Some (1), Strong (2)
Do you leak when lifting something heavy or in other strenuous
situations?
Yes (0), Even without strenuous activity (2)
Do you leak when doing something strenuous, or seconds afterwards?
At the same time (0), seconds after (2)
What quantity of urine leaks?
A little (0), moderate amount (1), a large amount (2)
Can you interrupt urination without leaking?
Yes (1), No (2)
Do you feel pain when urinating?
No (0), Yes (2)
Do you feel strong urgency in stressful situations?
No (0), Fairly strong (1), Yes (2)
How many times per day do you urinate?
5 times (0), 6-7 times (1), 8 or more times (2)
How many times do you urinate at night?
0-1 times (0), 2-3 times (1), 4 or more (2)
Have you had medication for urinary infections?
0-1 times (0), 2 or more times (1), chronic (2)
If the total is less than 7, stress incontinence is most likely.
Most patients with higher scores will respond quickly to electrostimulation with the NeuroTrac
5TM set in the URGE programme 2.

Treatment
Treatment of incontinence should be started only after a complete history and physical examination. The
therapy choices must consider all aspects of the woman's life. Since conservative therapy requires active
participation by the patient and surgery necessitates a long recuperation, the patient must be involved in
the choice of treatments. Conservative management of incontinence is appropriate for women who seek
improvement of their symptoms rather than a cure. All forms of conservative therapy are safer, less
invasive and less costly than surgical options. Pelvic floor exercises, first described by Kegel 60 years
ago, can diminsh episodes of stress incontinence by strengthening the levator muscles. Many clinical
studies show that simple verbal instruction is usually inadequate. Many multiparous women cannot
isolate and contract their levator muscles and only 30% of women who receive verbal instruction can
perform pelvic floor exercises corectly. It is important to learn to do the exercises in the right way. A
typical regiment of pelvic floor exercises is based on sets of short and long contractions performed 2 to 3
times a day. Patients ca expect 70 – 80% improvement in symptoms in about 12 weeks. Pelvic floor
exercises can be enhanced with biofeedback. With NeuroTrac 5 EMG biofeedback the patient quickly
learns to clench the right muscles. Acontractile levator muscles can be strengthened with NeuroTrac
GENUINE STRESS INCONTINENCE PROTOCOL. electrical stimulation (Programm 3). (see figure 2) Direct electrical stimulation of these muscles causes
hyperthrophy and increased strength and may inhibit inappropriate detrusor contractions in patients with
an intact neural pathway. Therefore, electrical stimulation can be used to treat mixed incontinence.
Electrical stimulation is applied by a probe placed into the vagina. The probe is then connected to a small
home device NeuroTrac. Electrical stimulation is usually given twice daily for 20 minutes (Programm 3).
Treatment results for genuine stress incontinence take about 12 weeks; detrusor instability may improve
in less time. (See Figure 1)The main treatment of urge incontinence is still an anticholinergic drug but
today electrostimulation has proven to be a more acceptable treatment. Anticholineric drugs reduce the
neurotransmissive capability of the entire parasympathetic nervous system, not just of the bladder nerves.
This may reduce urgency and frequency, but instead causes nausea, dry mouth, blurred vision and other
unpleasant side effects. Drugs do not cure urge incontinence.
TREATMENT OPTIONS FOR URGE INCONTINENCE
DRUGS OR NeuroTrac 5TM
Oxybutynin hydrochlorid
Maximal Electrostimulation
% Improvement in symptoms Cure or significant improvement: compared to pre-treatments or placebo: Cardozo (1) 63,5% Dry mouth, constipation, blurred vision, nausea, No side effects (5) facial flushing, abdominal discomfort and difficulty in micturition. CONTRA – INDICATIONS Patients with obstruction of the bowel, bladder Patients with heart – pacemakers. Pregnancy. outflow obstruction, intestinal atony, severe ulcerative colitis or toxic megacolon, myasthenia gravis, glaucoma. Breast feeding mothers. Use with caution in: the elderly frail, autonomous Patients with urinary tract infections. neuropathy, hepatic or renal disease, reflex oesophagitis, hyperthyroidism, coronary artery disease, arrhythmias, tachycardia, pragnancy. GENUINE STRESS INCONTINENCE PROTOCOL. References
Cardozo L – Neurol Urodyn 1987;6:256-257
Moisey CU – Br J Urol 1980;52:472-475
Kirkali Z – Int Urol Nephrol 1987;19(4):385-391
Barry PR – Female Incontinence, Pub: AR Liss Inc.
Eriksen BC – Neurol Urodyn 1989;8:219-230
Shepherd AM – Presentation to ACA Conferense 1993
Plevnik S – World J Urol 1986;4:24-26
Anna Pawlaczyk