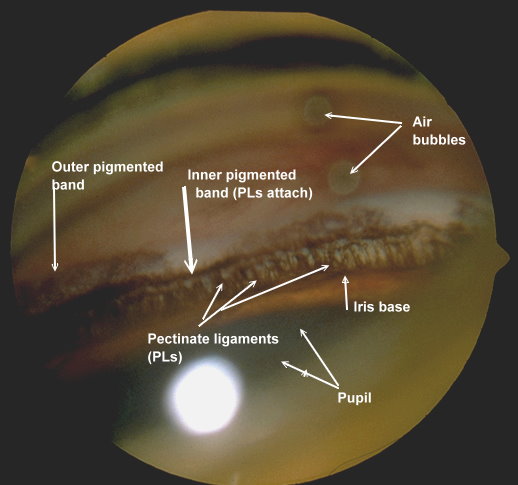 Glaucoma – New Insights Into an Old Problem
Animal Ophthalmology Clinic, LTD
If you ask any ophthalmologist to list the most frustrating problem that we face, invariably the answer will be glaucoma. It is the leading cause of blindness in dogs but is a nemesis in any species in which it presents. The frustrations stem not just from our frustrations at eliminating patient (and owner) suffering but also from the different causes and ways it may present, the potential for insidious onset and inexorable progression despite our best efforts, the number of ocular diseases and surgeries in which it may be a secondary complication, the time and economic commitment required for glaucoma monitoring, the myriads of treatments without one primary treatment that is uniformly successful, and the horrendous expense of medications, surgeries, and just lost time in man hours for both the owner and the practitioner. It is even frustrating for us to stand before you talking about the same disease year in and year out. However, we do have some new discoveries, new medicines, and new surgical techniques upon which we can rely. In the brief time we have with you today, I hope to bring you up to date on our newest discoveries and advances with the hope that we can through early detection and treatment prolong vision in affected animals. NEW INSIGHTS ON ANATOMY – PRIMARY AND SECONDARY
Iridocorneal angle
We have long understood aqueous humor flows anteriorly from where it is produced in the ciliary processes into the anterior chamber where it exits through the iridocorneal angle. Primary glaucoma has been described as open or closed angle depending upon the appearance of the iridocorneal angle. Examination of the angle is possible using a gonioscopy lens provided the cornea and aqueous are clear. Narrowing or other abnormalities of the angle can thus impair the flow of fluid from the eye although the there appears to be a great deal of reserve capacity in that prominent obstructions can be visibly present in the presence of a normal intraocular pressure. At the same time, inflammation can result in swelling of outflow channels and/or clogging of those same channels with inflammatory cells, fibrin, and protein in the aqueous Figure 1: Normal canine iridocorneal angle with well-differentiated pectinate ligament. 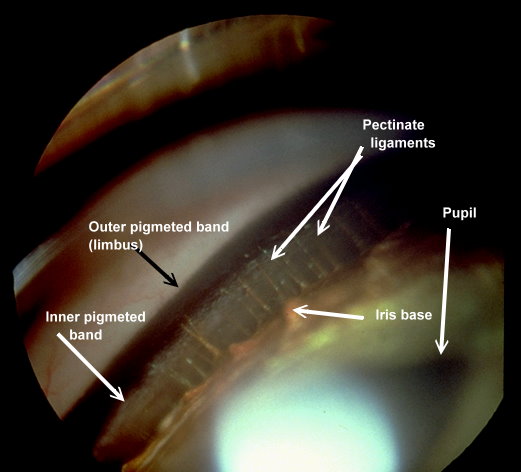 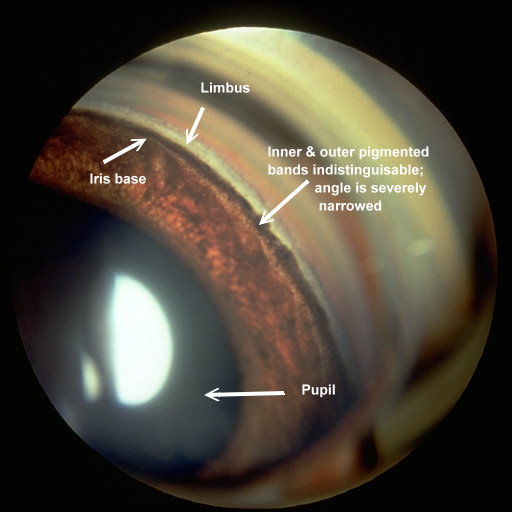 Figure 2: Normal feline iridocorneal angle. Note the very wide space between the iris base and where the pectinate ligament
attaches to the cornea.
Figure 3: A very narrow angle in cocker spaniel. The intraocular pressure in this eye was normal, but the fellow eye had
markedly elevated intraocular pressure. 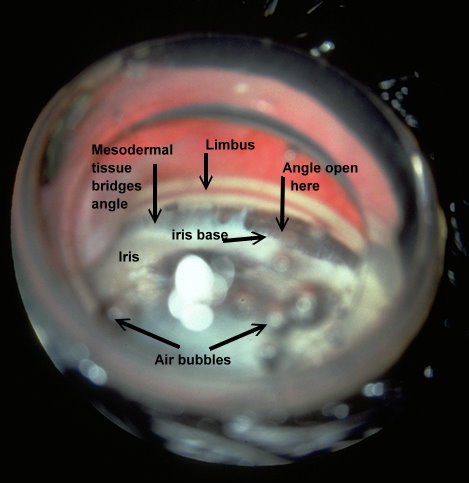 Figure 4: This is the iridocorneal angle of an Australian shepherd with mesodermal goniodysgenesis in which the pectinate
ligament did not differentiate completely resulting in areas where a broad membrane bridges the iridocorneal angle. While the
IOP was normal in this eye, it was elevated in the fellow eye where hyphema was present after the dog was kicked in the head
by a horse.

Ciliary Cleft
In recent years, through the use of high-resolution ultrasound (HRUS), we have been able to image the ciliary cleft where aqueous passes after it moves through the iridocorneal angle, and the results have revealed another factor that can contribute to increased intraocular pressure whether the iridocorneal angle is normal or not. In the following figures, note the differences in the ciliary cleft between the right and left eyes of a 10 year-old spayed female Boston terrier. The dog presented for cataracts and had a mature cataract in the right eye and an early immature in the left eye. At the initial examination gonioscopy revealed the iridocorneal angles were normal in both eyes. An electroretinogram was scheduled to evaluate retinal function (since the retina in OD could not be visualized) and prior to dark adaption the pupils were dilated with 1% tropicamide (a short acting anti-cholinergic mydriatic). The intraocular pressures (IOPs) were measured prior to and following dilation of the pupils. Prior to and following dilation the IOP in OD was 18 mmHg whereas the IOP in the left eye was 21 mmHg prior to dilation and 26 mmHg following dilation. HRUS revealed a normal ciliary cleft in the right eye with the mature cataract) and a markedly narrow ciliary cleft in the left eye with the immature cataract (See Figures 5 and 6.). Such occurrences illustrate the potential for problems with dilation of affected eyes as well as for an increased susceptibility for complications following cataract surgery. 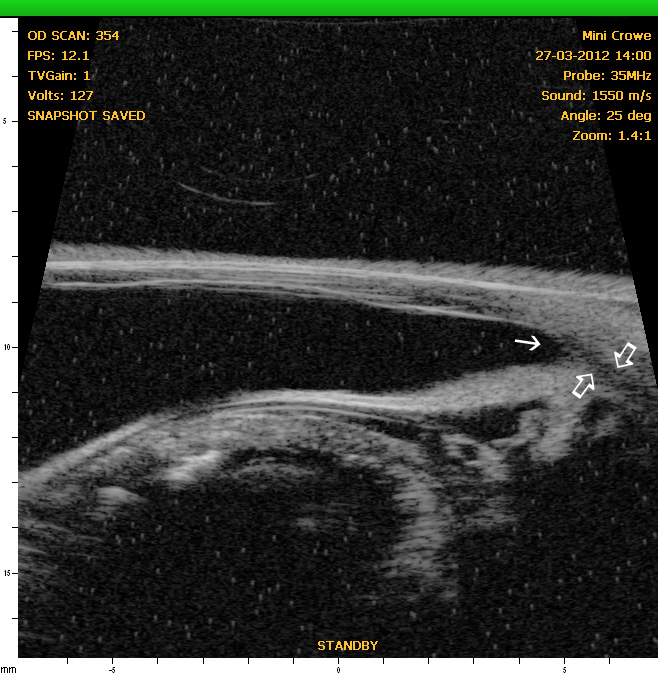 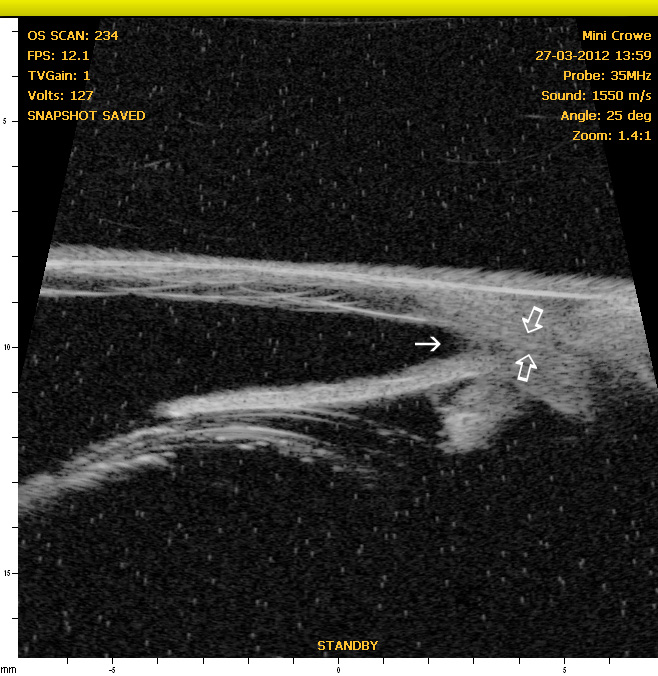 Figure 6: OS - Note the normal iridocorneal angle (solid arrow) but narrow to nonexistent ciliary cleft (open arrows)
accounting for the reason for the increased IOP in this eye after dilation.

PREVENTION OF GLAUCOMA
Primary vs. Secondary
The prevention of glaucoma centers on the recognition and, when possible, elimination of the risk factors. With secondary glaucoma this would center on the early detection and control if inflammation and secondary scarring. This may be easier said than done, but it is much more likely than eliminating the anatomic and genetic factors at play with primary glaucoma. In the latter, the best we may achieve may be to delay the onset of the elevated intraocular pressure as long as possible. The application of twice-daily topical 0.5% timolol with 0.1% dexamethasone or the use of 0.125% demecarium bromide once or twice daily with the 0.1% dexamethasone have been shown to delay the onset of angle closure glaucoma and may be administered to the eye with normal intraocular pressure. The exact mechanism remains to be fully elucidated, but prevention of inflammation and increasing facility of outflow are thought to be key factors. Some ophthalmologists favor immediately starting topical prostaglandin F2-alpha analogues or carbonic anhydrase inhibitors in the normal eye, but such action would eliminate the potential for gradually increasing medications as pressure rises or for countering an acute glaucoma attack while vision is preserved long enough to allow surgical intervention.
MOST EFFECTIVE CURRENT MEDICAL THERAPIES
Carbonic Anhydrase Inhibitors
Acetazolamide: 3-5 mg/lb b.i.d.-t.i.d. (greatest systemic side effects) Methazolamide: 1-2 mg/lb b.i.d.-t.i.d. (metabolic side effects still can occur) Dorzolamide (Trusopt) 2% ophth. soln.: 1 drop t.i.d. (Generics available) Dorzolamide 2% with Timolol 0.5% (Cosopt) : 1 drop t.i.d. (Generics available) Brinzolamide (Azopt) 1% ophth. soln.: 1 drop t.i.d. Prostaglandin F2-alpha Analogs - once or twice daily dosing
Latanoprost 0.005% (Xalatan - available as generic) Travoprost 0.004% (Travatan Z) Bimatoprost 0.01 and 0.03% (Lumigan) Act to increase aqueous outflow + ? (uveoscleral flow, others?)
Notes and precautions:
Increase iridal, eyelid and eyelash pigmentation in man and primates Use with caution in uveitis & lens luxation – potent miotics Hyper-osmotic Agents
While Mannitol (0.5-2 g/kg slow IV) is classically recognized, it is cumbersome to administer and not without significant risk of systemic side effects. Further it must be administered in the hospital. Oral U.S.P. pure glycerin is administered orally at 1/3 cc/lb with equal volume of water, milk, or melted ice cream. After dosing, withhold water for 1.5 hrs. May be repeated q. 8 h. and may be kept at home by the owner for emergency use in acute glaucoma.
CURRENT SURGICAL TREATMENTS
For Visual Eyes
Diode laser cyclophotocoagulation is perhaps the most successful long term surgery and is usually
performed using an endoprobe to allow visualization and ablation of individual ciliary processes. It is
usually performed with or without lens extraction, and an Ahmed valve or other shunt may be
implanted prior to performing this procedure to allow a means of ameliorating postoperative pressure
spikes associated with inflammation from the procedure. Alternatively repeated anterior chamber
paracentesis may be performed postoperatively but that may need to be done several times per day
for 2-4 days. Trans-scleral cyclophotocoagulation preceded this method but causes so much
inflammation that shunts were/are usually tried first. Shunts are indicated to provide immediate
lowering of IOP with less potential for postoperative inflammation. Repeated procedures may be
needed and costs are significant.
For Non-visual Eyes
Enucleation, intraocular prosthesis, or intravitreal injections of gentamicin should be considered in cases where vision is irreversibly lost. These procedures along with their pros and cons will be discussed in lecture.

ANCE & ROM Subtitle: The infamous ‘Thunderboat Row' of Miami's NE 188th Street no longer exists, its valuable real estate now occupied by high-rise waterfront condos, but the legacy of a brand that turned this narrow peninsular into the epicenter of performance offshore boating endures. Under the paternal stewardship of Skip Braver, the Cigarette Racing Team brand maintains its